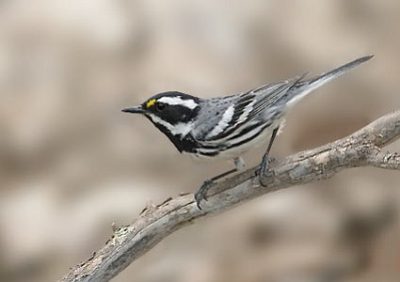 After writing last week’s column, I had three more days of birding left in the Wickenburg area, resulting in a variety of additional bird observations — some of which we did not see the previous week.

At our hotel, we watched a merlin (a small falcon) flying directly over us, carrying prey. Shortly thereafter it landed, and we were able to see that it had a male house sparrow in its talons, which it proceeded to eat.

In Walnut Grove, along the banks of the Hassayampa River, we saw a Hutton’s vireo. While this species is in the Central Highlands area of Arizona year-round, it is seen infrequently. Over the last 10 years while guiding these Road Scholar bird watching trips for NAU, we have only seen a Hutton’s vireo on a handful of occasions.

Probably one of my favorite bird sightings last week was a striking male black-throated gray warbler at Tenderfoot Hill Park in Congress. It was moving around in a palo verde tree, and everyone in the group was able to get a great look at it.

Another highlight was getting my scope on a singing male pyrrhuloxia that was probably no more than 30 feet away. I have seen pyrrhuloxias in the Sonoran desert for more than 40 years, but I think last Friday’s sighting was one of the best looks I have ever had.

At the Hassayampa River Preserve, we saw a beautiful male broad-billed hummingbird battling for feeding rights with countless numbers of Anna’s and black-chinned hummingbirds. All of these hummers were vying for a spot at one of the four feeders hung off the eaves of the visitors’ center.

As I have mentioned in numerous columns over the years, one of the best ways to reduce the amount of fighting at a hummingbird feeder is to put multiple hummingbird feeders in close proximity to one another. Putting several feeders within a few feet of each other makes it difficult for one aggressive hummingbird to guard all of the feeders at the same time.

This time of year, if you are consistent in your bird feeding, providing a variety of food sources such as seed, suet, nectar, fruit and water, you will likely experience the greatest diversity of birds in your yard. The month of April is unique as we have year-round residents, lingering winter residents, and transient species all occurring here and overlapping for a brief period of time.

Transient species are birds that neither winter nor summer here, but just pass through this area during migration. This past Sunday I saw a beautiful male rufous hummingbird in our yard. In the spring, rufous hummingbirds move quickly through our area on their way to their summer breeding range. This is a species that winters as far south as Central America and breeds as far north as southern Alaska.

It is definitely time to put up your hummingbird and oriole feeders so food is available to these birds as they show up. Many migratory birds use backyard feeders to refuel before continuing their migration. When birds discover a source of food, they are more inclined to stick around for a day or two, whereas if there is no food present they are likely to move on.