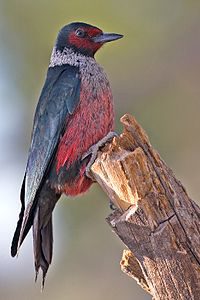 On my day off last week I headed west on Thumb Butte road into the National Forest to see if I could find a flock of Lewis’ woodpeckers that had been reported a day or two earlier. Lewis’ woodpeckers are considered a “casual” visitor to the Prescott area, meaning they have been seen more than five times over the last 30 plus years, but they do not occur in this area on an annual basis.

An interesting side-note on Lewis’ woodpeckers is some background on how this species was named. Lewis’ woodpeckers were originally discovered in the early 1800s by members of the Lewis and Clark expedition and was named after Meriwether Lewis. Another species that received its name as a result of the Lewis and Clark expedition is the Clark’s nutcracker. Many bird species in North America bear the name of the individual who originally discovered the species.

About two miles after the pavement ended, I found my target species – there were actually quite a few Lewis’ woodpeckers visible on both sides of the road for a mile or two. The habitat between Thumb Butte and the community of Dearing Park is primarily ponderosa pine, with a fair amount of scrub live oak.

The area where I saw the Lewis’ woodpecker is prime habitat for woodpeckers in general. In less than an hour’s time, I saw six different woodpecker species including Lewis’, acorn woodpecker, hairy woodpecker, northern flicker, Williamson’s sapsucker and red-naped sapsucker.

I continue to work on my Centennial Challenge 2012 bird list. I am attempting to sneak in a few minutes of bird-watching here and there when I can. I visited Willow Lake late in the day this past Saturday. The sun was setting as I arrived, so my birding time was limited – but it was productive. I added several species to my year list including spotted sandpiper, rock wren, Canada hoose, canvasback and ruddy duck.

Earlier in the day, Micah Riegner led a free guided bird walk to Willow Lake, and the group had a super morning. They saw 42 bird species in about a four-hour time period. What a great start to the year!

Some of the highlights of the bird walk included seeing the pair of white-winged scoters and numerous birds of prey including bald eagle, northern harrier, red-tailed hawk and sharp-shinned hawk. If you are interested in participating in one of our free weekly bird walks, call the store at 443-5900 to sign up.