In Winter, Where There’s Berries, There are Birds 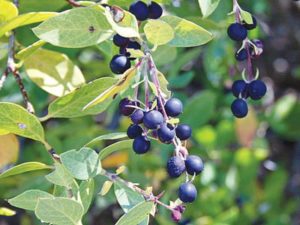 This past week, I was able to squeeze in a little time to hike one of Prescott’s fabulous trails. Last year, the City of Prescott built a new trail in conjunction with the 100th anniversary of Arizona Statehood. Appropriately, the trail is called the Centennial Trail.

There are two parking areas where you can access the trailheads. One trailhead is just off Iron Springs Road. Turn south onto Kile Street and follow the road until it dead ends – the parking lot will be on your left. The other access point is off Westridge Drive just west of Gail Gardner Road.

This is one of those trails where, in spite of being in the city limits, you have the feeling that you are very far away from civilization. We are blessed to live in a community where we have easy access to open space.

The trail traverses a habitat that could best be described as a transition zone. In addition to an abundance of granite boulders, part of the time you are in a chaparral habitat, sometimes you are in a pinyon/juniper habitat, and at times, you will hike through areas with a smattering of ponderosa pines.

All through the chaparral and pinyon habitat, there is an extensive expanse of a native plant known as Wright’s Silk Tassel. Silk Tassel produces an abundance of purple berries that form in small clusters. As it turns out, these berries are very desirable to birds!

When I go hiking, I always take my pair of EL 10×42 Swarovski binoculars with me, as I always like to be prepared to look at birds that I encounter. As I hiked the Centennial Trail, I saw flocks of American robins. Later I saw a hermit thrush and a Townsend’s solitaire.

What does each of these bird species have in common? They are all berry eaters! It is so interesting to observe how birds naturally find habitats that meet their food needs. This area was thick with silk tassel bushes, and the bushes were loaded with berries.

There are several other bird species in this area that are dependent on a diet of berries in the fall and winter months, such as Western bluebird, phainopepla and cedar waxwing. If you are planning to do some landscaping in your yard and you want plants that are native to this area and that are bird friendly, consider Wright’s Silk Tassel.

Most people usually think of robins and bluebirds as insect and invertebrate eaters. This is generally true in the spring and summer months. However, once we start getting freezing temperatures and the insect population dies off, these species change their diet from insects to berries during the winter months.