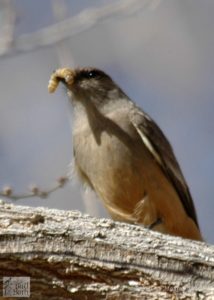 Last week’s winter storm provided a vivid reminder of how fragile life can be for wild birds, literally living on the edge of survival from day to day. Between the snow and frigid temperatures, wild birds were forced to use their best instincts to survive (with a little help from their human friends).

Last Thursday, there were times when we had near whiteout conditions here at Jay’s Bird Barn. There was a lone Say’s phoebe hanging around outside our store-a species that preys primarily on flying insects. As you can imagine, there were no insects to be found on a day like last Thursday.

Fortunately we sell live mealworms in our store, so throughout the day my son Jay,and I sprinkled a handful of mealworms down on the sidewalk right in front of the store. It was very satisfying to watch the phoebe gobble them up. I personally felt that if we had not provided the food, he would not have made it through the night.

Later in the day a lone male great-tailed grackle showed up to. We put some birdseed on the cement, and the grackle immediately took advantage of this boon, which soon brought in another and then another grackle. What pretty birds!

At our home, we had about 12 inches of snow, and I heard from a lot of our customers living along the southern edge of Prescott, at the base of the Bradshaw Mountains, that they received at least 18 inches of snow.

It was a wonderful storm – unless you are a ground-dwelling and feeding bird such as Gambel’s quail, mourning dove, crissal thrasher, western meadowlark, dark-eyed junco, white-crowned sparrow or a towhee. Before heading to the store Thursday morning, I used a shovel and cleared out a small area right down to the surface of the soil and then put a bunch of seed down for all of my ground-feeding birds.

Another species that was particularly challenged by the storm was the Anna’s hummingbirds that winter over. On New Year’s Day, our morning low was 4 degrees. I don’t know the bottom line on how low a temperature Anna’s can survive, but on Monday of this week I had several customers tell me they still have a hummingbird in their yard.

I enjoyed hearing the heroic efforts of people taking care of their hummers, using several feeders that they would swap out throughout the day to keep the nectar from freezing and bringing their feeders in at night. I am convinced that without this tender, thoughtful care most of these hummingbirds probably would not have made it through the night.

Wild birds are warm-blooded creatures with very high energy needs, requiring enormous amounts of food to stoke their metabolic engines. I can’t help but think that surely we must have lost some of our precious birds in the storm – it is just unrealistic to think otherwise. I thank you for your efforts this past week to look after and feed the wild birds visiting your yard, and I am confident that you made a difference.

We still have several more months of winter ahead, and I encourage you to be consistent in your feeding activity. As much as possible provide clean, nutritious seed and feed products, including suet, every day. Not sure what kind of feed you should be providing this time of year? Please stop in and we will give you our Bird Seed 101 lecture.