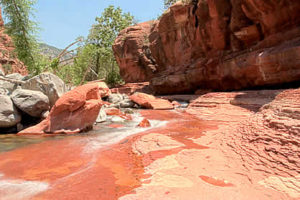 This past week I presented the monthly program for the Northern Arizona Audubon groups in both Sedona and Flagstaff. Being in northern Arizona provided me with an opportunity to get out and go birding, of which I took full advantage!

If you are looking for a breathtaking destination combined with a relatively easy hike, may I recommend West Fork in Oak Creek Canyon? Located about 12 miles north of Sedona on Highway 89A, West Fork is a fabulous location for both hiking and birding.

For those of you working on a Centennial Challenge birding list for 2012, several Arizona specialty birds are fairly easy to see in the canyon. I added four new species to my 2012 state list: indigo bunting, painted redstart, red-faced warbler and cordilleran flycatcher.

In the area between the parking lot and the bridge there is an old apple orchard. It was in this area that I found both lazuli and indigo bunting singing from high, exposed perches – making it fairly easy to find them. There were also a lot of Bullock’s orioles in the area around the parking lot.

After hiking about a mile into the canyon, I found the painted redstarts and red-faced warblers. Both species were busy vocalizing – either to attract a mate or to defend their territory from other birds.

On more than one occasion, I saw painted redstarts with a beak full of food, indicating there were active nest sites near the trail.

There were two bird species that I was hoping to see on my hike: hepatic tanager and broad-tailed hummingbird. I ended up seeing several western tanagers, but I never did see any hepatic tanagers. I am sure they were there; I just didn’t find any.

The sound is easily recognizable and can alert you to the presence of this species long before you see it.

As I hiked in the canyon, I probably heard male broad-tailed hummingbirds at least a dozen different times, but I never did see one. Since the sound is only produced when they are in flight – and since finding a flying hummingbird is difficult – I just struck out.

Friday night my son Landon and I camped on top of Mingus Mountain, and I finally got to see some hepatic tanagers, another new species for my 2012 list. I also saw Grace’s warbler and several painted restarts. I heard broad-tailed hummingbirds, but was again unsuccessful in seeing them.

Taking a birding trip to the higher elevations will certainly boost your bird numbers, as many of our summer bird residents prefer the specific types of habitats found at elevations above 6,000 feet. Visiting as many different habitats as possible throughout the year will bring you the widest variety of birds as you explore the great state of Arizona in 2012.

On a different note, I would like to personally invite you to attend the Prescott Audubon Society’s monthly meeting at 7 p.m. today at Trinity Presbyterian Church, located at the corner of Park Avenue and Copper Basin Road, in Prescott. I will be presenting a program on my recent trip to Brazil. I will be sharing a lot of the pictures I took of the amazing places I visited and the even more amazing birds that I saw in Brazil. I hope you can make it.