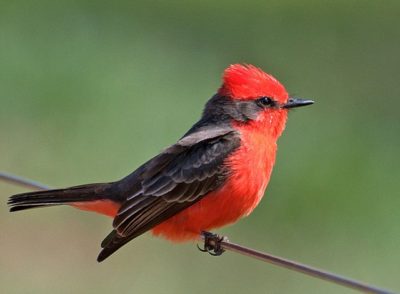 In last week’s column I wrote about the first two days of last week’s Road Scholar birding program that I am leading for Northern Arizona University. By the time the program ended on Friday our bird list included over 100 different bird species. Probably one of the more common bird species we have seen both weeks is the beautiful vermilion flycatcher.

I was especially pleased with the variety of birds of prey observed. Our daily field trips out from and back to Wickenburg has produced an amazing variety of birds of prey including; gray hawk, Harris’ hawk, black hawk, zone-tailed hawk, ferruginous hawk, red-tailed hawk, red-shouldered hawk, Cooper’s hawk, American kestrel, golden eagle and osprey!

The story behind the osprey sighting is interesting. In our evening meeting last Thursday night one of the participants asked whether it was possible he could have seen an osprey along state highway 89 between Congress and Wickenburg. He said he thought he saw one sitting on a telephone pole adjacent to the highway. We replied that it was possible, but not likely.

Our birding destination the next morning was Congress, and to get there we had to re-trace our route from the previous afternoon. At some point the participant mentioned “this is about the spot where I thought I saw the osprey yesterday.” Sure enough, within a quarter of a mile there was an osprey sitting on top of a telephone pole. We pulled over, got the scope on the bird and were elated to see it.

Of course the obvious question was, “where is the nearest water”? Ninety-seven percent of an osprey’s diet is fish, and as far as I could tell we were nowhere near water. The conclusion we came up with was that the osprey was probably just migrating through the area.

On Tuesday of this week, as I was making an early morning run into Wickenburg to pick up our sandwiches for later in the day I saw a sight that really surprised me. As I was driving past a city park I noticed a seagull. After picking up our lunches I quickly drove back to the hotel, picked up all of the birders and we went to the park to see if the gull was still there. It was, and we identified it as a ring-billed gull. Another surprising find in the desert—this is not a location where you would expect to see a gull.

There have been some really windy days in the early part of this week, and I can’t help but think that the wind has maybe facilitated some migration activity. On Monday night we saw several Swainson’s hawks flying with large numbers (in the hundreds) of turkey vultures. I think many of the birds on the move right now have taken advantage of the wind which helps them migrate while expending the least amount of energy.

Already this week we have seen several species that we did not see last week such as bald eagle, Swainson’s hawk, belted kingfisher and double-crested cormorant. It is an interesting experience to go to the exact same location one week apart and have such a dramatic difference in the variety of birds seen, as well as the number of birds seen.

If you have not put up your oriole feeders yet I would strongly encourage you to do so before they arrive. Birds discovering sources of food and are more inclined to stay put whereas if there is no food present they are likely to move on.