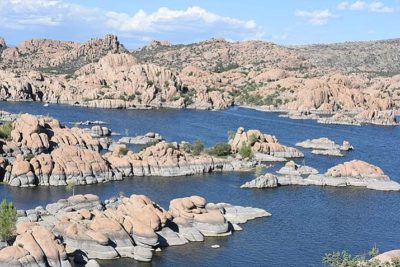 Team Jay’s Bird Barn enjoyed a delightful bird watching experience earlier this week as we spent time visiting a variety of habitats in an effort to boost our total species count as part of the Prescott Audubon Society Birdathon fundraiser.

The day started out super birdy but grew quieter as the day progressed—perhaps due to the time of day, but also due in part to the high winds that kicked up.

Our first birding efforts included some ‘urban’ birding right in town.  We took a quick look at a Swainson’s hawk sitting on its nest at a location right off of Ruth Street.

Our next stop was the Waste Water Treatment plant off of Sundog Ranch Road.  This was a very productive stop.  While there we saw a number of species, including three types of swallows—violet-green, northern rough-winged and cliff swallow.  There were also several species of water birds, including a lone black-necked stilt, a single spotted sandpiper, killdeer, several ring-necked ducks, mallards and gadwalls.

We then hopped across Prescott Lakes Parkway and dropped down into Watson Woods—wow, was it bustling with bird activity!  I truly had a difficult time staying focused on just one species at a time.  I would see a yet-unidentified bird moving through the foliage of a cottonwood or willow tree, and before I could settle on an identification I would get distracted by a bird flying by or by the vocalization of yet another species.

There is an expression birders frequently used to describe an area or a habitat that is heavily used by migrating birds to rest and refuel.  These areas are referred to as a ‘migrant trap’.  Based on the numbers of birds and the variety of birds, it almost felt like Watson Woods was a migrant trap where birds passing through the Arizona Central Highlands were drawn to the area because of its high value in food availability.

Riparian habitats such as Watson Woods act as a host for migrating birds that need to rest and refuel before continuing their migration northward in the spring.  The variety of birds observed included many recent arrivals.  These birds were using Watson Woods as a ‘rest stop,’ much like how we use rest stops when we are traveling long distances.

Many of the birds observed there were new for my year list.  Prior to that day, I hadn’t seen any of those species this year.  Some of these birds were black-headed grosbeak, blue grosbeak, warbling vireo, Townsend’s and Wilson’s warbler and western wood-pewee.

Watson Woods is a city-owned property that is managed by Prescott Creeks Preservation Association, a non-profit that is the steward for this important habitat.  Years ago this area was officially designated as an ‘Important Bird Area’ by the National Audubon Society, which means that this habitat is critical to the protection and preservation of birds using this area.

We eventually made our way up to Mingus Mountain to bird watch in an area with a damp ravine.  Historically, when I have visited this spot, it has been quite birdy.  Unfortunately, by the time we arrived it was ghostly quiet.  I assume the wind affected our ability to find the birds we went there specifically to see.

We only had time to bird half a day, from seven to noon.  For the day we compiled a list of 71 different species—not bad, but still a little disappointing to me.  One thing you learn very quickly as a birder is that you cannot always predict whether your day will be birdy or quiet.  On this day, we experienced both.