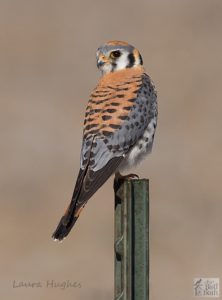 Last Friday I went birding to quickly scout out the area where I would be leading a bird walk the next day. I did a quick run-through to see what birds we might reasonably encounter the following day.

Saturday morning we made a brief stop at the overlook on Highway 89 to check out the birds at Watson Lake. The main reason for stopping there was to see the tundra swans. They were very cooperative – they were in the water directly below the pull-out!

The highlight at this stop, however, was a hovering American kestrel. It maintained absolutely perfectly its position in the air while hunting for prey. What made this sighting so incredible was that we were practically eye-level with the kestrel. We were up on the elevated overlook and it was flying over the weedy area below, putting it right at our level.

Our next stop was the recharge ponds out by the airport. As you may recall, last Saturday was overcast, windy and cold. In spite of the weather conditions, the bird walk was surprisingly birdy. While we were being buffeted by the intense winds, the birds seemed to take the deteriorating weather in stride.

Before we got organized as a group – we hadn’t even left the parking area – something stirred up the birds in the pond directly behind us. It was probably the peregrine falcon that flew by, or perhaps it was the bald eagles.

There was a brief period of time when the bird activity was so plentiful that we had to choose between watching a bald eagle or a peregrine falcon! Talk about a tough decision! I chose to focus my attention on the falcon, which ending up putting on a real show. It was very active, swooping over this one particular area time and time again. Several times it would land briefly on a fence. At one point, while it was perched on the fence, it was dive-bombed by a northern harrier!

We saw at least two northern harriers, and we were able to observe one of them hunting – feet fully extended as it repeatedly dropped down into the water attempting to grab what I assumed was an American coot.

A little later we saw three bald eagles at the same time – two adults and one immature. And later, while we were walking along a berm looking for snipe (we only had fleeting, in-flight looks at a handful of snipe), a merlin flew by. I was hoping it would land either in a tree or on a fence so I could get the scope on it, but it just kept on flying. This brought the number of falcon species we saw for the day to three: peregrine, merlin and kestrel.

Needless to say, the central highlands area of Arizona is a wonderful place for wintering birds of prey. We were in bird-of-prey heaven!

For the day we saw a total of 33 different species in about two hours, including hundreds of ducks, flocks of red-winged blackbirds, American pipits and horned larks. In spite of the cold, we had a wonderful time.

So far I have seen 107 species this year as part of my quest to see and identify as many species as I can in Arizona in 2012, so I am off to a pretty good start. I encourage you to make the commitment to get out and explore Arizona during the centennial year. Information on the Jay’s Bird Barn Centennial Challenge is available online at www.jaysbirdbarn.com.