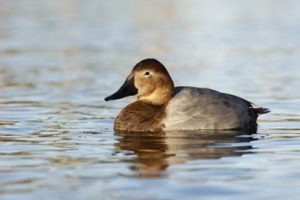 Wednesday, Dec. 18, was the Prescott Audubon Society’s annual Christmas Bird Count. I was assigned to canvas the Granite Basin area from the intersection of Iron Springs and Granite Basin Road all the way to Granite Mountain.

I did a four-hour reconnaissance one week prior to the bird count to scout out my area and see what I could find bird-wise. The difference between the two outings was remarkable.

When I went on Wednesday, Dec. 11, the entire surface of the lake was solid ice, from edge to edge – there was no open water at all.

With the lake frozen over, there were very few water birds – five to be exact: one mallard, one American wigeon and three American Coots. The diet for each of these species is primarily aquatic plants. Since there was no access to their preferred food, they looked miserable sitting on top of the ice.

A week later, on the day of the Christmas bird count, the lake was about 95 percent ice-free and hosted a variety of duck species including canvasback, ring-necked, American wigeon and mallard. Surprisingly, there were no coots even though the water was now open.

Other than dark-eyed juncos, the most abundant birds in the basin were woodpeckers – including acorn, hairy, red-naped sapsucker and northern flicker. We spent a lot of time and energy looking for Williamson’s sapsuckers, but we were never successful in finding any even though I had seen one the week before.

We got great looks at a Canyon Wren, and I was pleasantly surprised when we found a lone House Wren, which afforded us great looks! In all of the years I have covered this area, this is the first time I have encountered a House Wren on the day of the Christmas count.

The biggest surprise of the day was a creature that flies – but it was not a bird. At the end of the day, after the sun had already gone down and darkness was settling over the basin, we discovered a lone bat flying over the surface of the lake, aerial foraging. I was really shocked by this discovery. I have never seen a bat in Prescott in December.

I focused on it with my binoculars and watched it flying around and around the lake, with its halting, fluttering flight, twisting and turning in the typical erratic flight pattern characteristic of bats. It was hardly more than a week ago that the basin area was experiencing single-digit temperatures. It is hard to fathom how a bat could have survived such extreme conditions.

The weather for this year’s count was one of the nicest I can remember. In spite of the great weather, it was very challenging to find birds. Much of the day passed in silence, with very few birds to be seen. We did not observe any “irruptive” species such as pine siskins, red crossbills, Cassin’s finch or evening grosbeaks.

For the day we ended up seeing a total of 36 species, which isn’t bad considering the time of year. Interestingly, on Friday, two days after the bird count, I had a red-breasted nuthatch in my yard! In more than ten hours of birding on the day of the Christmas Count, we hadn’t seen any.

I am excited to announce we are moving back to our original location in the Safeway shopping center this weekend, and we will open be open for business in our old location on Monday, Dec. 30!