Warm weather confusing the birds and the bees 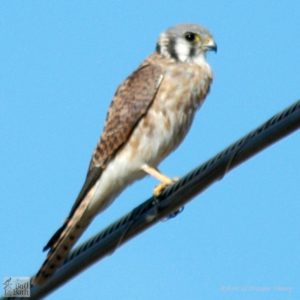 My family spent five days in Tucson over the Christmas holiday. On Christmas Day, we hiked Pusch Peak in the Santa Catalina Mountains.

Hiking Pusch Peak is like climbing stairs for two hours as you make the 3,000-foot ascent from the trailhead to the summit. The habitat at the base is upland Sonoran Desert, with large saguaros and an abundance of palo verde trees. As we hiked up the mountain, the sagauros gradually gave way to yuccas and other higher-elevation desert plants.

After hiking for about an hour and a half, one of the kids pointed out a large bird of prey flying overhead. Being a hardcore birder (and a good Boy Scout) I was prepared. Using my Swarovski binoculars, I quickly found the bird, and to my surprise I discovered it was a northern harrier (formerly called a marsh hawk.) In my experience this bird was totally out of place, as its preferred habitat is typically near water – not in a rugged, mountainous terrain.
After reaching the summit, we had the thrill of seeing at first one – and then a few minutes later a second – peregrine falcon. I was able to get my binoculars on both of them, and from our vantage point on top of the mountain it was like looking at them eye-level. I have to admit, I got a little excited as I watched the world’s fastest bird in action.

There were strong winds gusting at the top of the mountain, and the falcons were taking full advantage of the updrafts. Without so much as a wing beat, they were flying – first in one direction, and then in another, at incredibly high speeds. Because of the steepness of the terrain, the falcons were literally flying thousands of feet above the desert floor.

Shortly after the two peregrines flew out of view, a lone male American kestrel flew by, which also surprised me, as I would not have expected to see this species in this setting. Then on our way down the mountain, we saw a beautiful red-tailed hawk! I was so impressed that we saw four different birds of prey species on our hike.

On a local note, our weather this week has been downright spring-like. Tuesday the official high in Prescott was 69 degrees. The normal high for Jan. 17 is 52 degrees. This unseasonably warm weather has the birds and the bees a little confused. On Monday, I observed a male house finch carrying nesting material in its beak.

The sudden onset of warm weather has also resulted in bees emerging from their hives – only to discover that there are no flowers. What food sources are bees going to exploit in January when there are no flowers? Birdseed! The two most common seed items sought after by bees are cracked corn and sunflower hearts.

If your seed feeder is inundated with bees, I would suggest doing nothing. Sometimes I hear stories of folks using bee or wasp killer spray. I strongly discourage this. Bees are an absolutely critical component of a healthy environment dependent on pollinators. When the weather turns cold again, the bees will leave and retreat to the protection of their hives. However, if we get another spell of unseasonably warm weather, don’t be surprised if the bees come back. When spring arrives with its profusion of wild flowers, the bees will completely ignore your seed feeders.