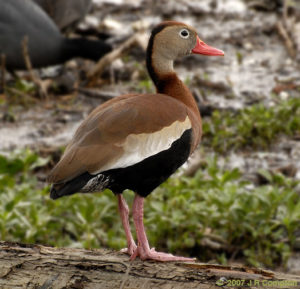 A black-bellied whistling duck was seen at Willow Lake this past week. This is a very rare bird for our area – certainly one worth seeing. I went out to the lake on two different occasions to look for it but struck out both times. However, I did see a lot of good birds while I was there.

In fact, I was downright surprised by the diversity of bird species that are still present at the lake. This time of year one would expect to see the “regulars,” such as double-crested cormorants, great blue herons, mallards, coots and ruddy ducks.

However, in addition to all of our common summer residents, there were still a wide assortment of species that should have already left by now. Some of the bird species that I was surprised to see were cinnamon teal, green-winged teal, gadwall, redhead ducks, white-faced ibis, black-necked stilt, American avocet and spotted sandpiper.

Last week I had the opportunity to lead a bird walk for the Highlands Center for Natural History as a part of their annual Birding Spree program. We met at the White Spar Campground and ended up spending a good portion of the time birding from the parking lot because there was so much bird activity! We just stood in the parking lot and tallied one species after another. A few of the species we saw were warbling vireo, cordilleran flycatcher, acorn woodpecker, American robin, spotted towhee, western bluebird and blue grosbeak.

After a while, we reluctantly left the parking lot and made our way up into the Ponderosa Pine forest – where it was not nearly so birdy. However, with time and patience we were able to rustle up a variety of birds including a beautiful painted redstart, bridled titmouse, the red-backed form of the dark-eyed junco, pygmy nuthatch, northern flicker, brown-headed cowbird and bushtits.

Our best find of the day was a female black-chinned hummingbird, sitting on its nest! When we first found her she was flying, and we watched her as she made her approach to the nest. It was amazing how tiny the nest is and how well it blends in with its surroundings. You need to be really observant to find a hummingbird’s nest.

I finally saw my first baby quail in my yard this past week, but it really isn’t a happy story. One night last week when I came home from work, I immediately began working in the yard. At some point, I became aware of some peeping sounds coming from an area north of the driveway. I knew that sound, and I knew what it meant.

I ran to the door of the garage and yelled for my son to grab a flashlight and to come quickly. We have a pit in our yard lined with Versa-Lok blocks. Our trampoline sits down in the hole so the top of the trampoline is at ground level. A single baby quail had fallen down inside the hole and was hopelessly stranded.

My daughter climbed under the trampoline and rescued the quail, and handed it up to my son. It was almost dark and there was no way of reuniting it with its family at that late hour. We gave it a little water and found a place in the yard to leave it, hoping that perhaps in the morning it would be able to find its parents and siblings. We don’t know the end of the story, but I hope it had a happy ending.