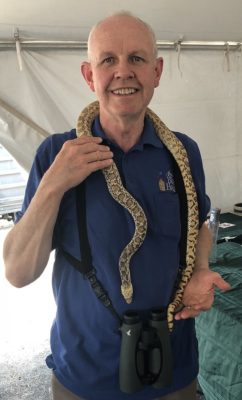 This past week was the annual Verde Valley Birding and Nature Festival at Dead Horse Ranch State Park in Cottonwood.  Each year, Jay’s Bird Barn participates in the festival by guiding field trips, providing workshops and also participating as a vendor.

As we attended the festival again this year, we were reminded just how birdy the Verde is. At first we didn’t have a specific goal for the number of species we were hoping to see. However, by the second day it was obvious we were compiling an impressive list of birds, and we dreamed of seeing one hundred species during the event.

Early Thursday morning, before the vendor tent opened, we visited Sedona Wetlands wildlife viewing area. We also spent time at Page Springs Fish Hatchery and Bubbling Ponds. Our list continued to grow at a fast clip.  As soon as the vendor booth area closed, we were back out birding until dark.

Early Friday morning, we visited Tavasci Marsh before returning in time to host the armchair birding field trip. West of the River Day Use Area is an area with seed, nectar and suet feeders with places to sit and watch the birds. The morning I hosted armchair birding, we saw 25 species without having to move from one spot!

The timing of the festival each year coincides with spring migration. Each day we could see the ebb and flow of species either arriving or leaving. For example, on the first day we saw a lot of white-crowned sparrows. By the last day, there were very few white-crowned sparrows to be seen. On the first day, there were both Anna’s and black-chinned hummingbirds, and then a female rufous showed up on the third day.

The biggest change in species occurred with warblers. Each day we saw a lot of warblers, but not necessarily the same species. For example, I didn’t see a single Wilson’s or MacGillivray’s warbler Wednesday through Friday, but on Saturday they were abundant. Saturday morning, as we walked the Greenway trail, we saw 10 species of warblers — Lucy’s, yellow, Virginia, black-throated gray, orange-crowned, Wilson’s, yellow-rumped, MacGillivray’s, common yellowthroat and yellow-breasted chat.

Lazuli buntings were non-existent the first few days of the festival, but by Saturday we were seeing a handful in the armchair birding area. Green-tailed towhee numbers swelled as the week progressed. By the last day of the festival we encountered many of these migratory birds.

We had great success seeing many sparrows, including a rare Harris’ sparrow.  This is only the second time in my life I have ever seen this species.  We also saw Chipping, Brewer’s, vesper, Lark, Savannah, Song, Lincoln’s and white-crowned sparrow — nine different species!

We also had a lot of success finding flycatchers, including gray, dusky, ash-throated, and brown-crested flycatchers.  We also observed Western kingbirds, Black and Say’s Phoebes and vermilion flycatchers.

The next two weeks is a great time to get out in nature to see some of the migratory birds passing through the Arizona Central Highlands.  Look for grosbeaks, buntings, orioles, warblers, vireos and sparrows.

I ended up seeing 105 species during the festival, which pleased me greatly.  Until next week, Happy Birding!