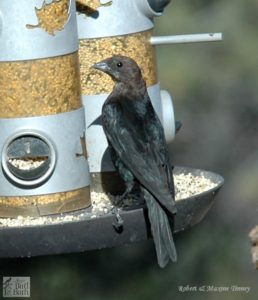 Happy Veterans Day! This year, Veterans Day has more significance to my wife and me, as our son Jeremy is graduating from boot camp at Fort Leonard Wood in Missouri on this very day. In fact, as you read this column, Gayla and I will be Missouri attending his graduation ceremony.

Of course, while I am in Missouri, I am hoping to be able to do some serious bird-watching. It was just a month ago that I was in Missouri attending a trade show, and I really enjoyed my time spent birding there.

I have an unusual story for you today. Last week, on my day off, I was out working in our yard. I had my cell phone in my shirt pocket and at one point as I leaned over to pick something up, my phone slipped right out of my pocket and did a perfect dive-landing directly in a rain gutter drain pipe.

The phone quickly disappeared out of sight as it descended into the murky water. It happened so fast I could hardly believe it. The diameter of the pipe was too narrow for my hand and arm to reach down into. I raced into the house and yelled for my daughter to come outside quickly. Fortunately, Kara has skinny arms, and she was able to reach far down into the pipe and remove my soaked phone.

Now you might be wondering what this story has to do with birds. Well, it doesn’t directly, but it does have to do with birdseed. Later that night I was telling some young adults about my cell phone disaster and they suggested that I put my phone in a bag of rice. They said the rice would draw the moisture out of the phone.

Well, since I have thousands of pounds of white-proso millet here at the Bird Barn, and since millet has a very low moisture content, I thought millet would make a suitable substitute for rice. I filled a zip-lock baggie with millet and buried my phone in the birdseed. Twenty-four hours later I removed the phone, put the battery in, and guess what? It worked! In fact, my phone is working as well as it ever has.

Back in September when we were canoeing at Willow Lake, I was trying to catch a snake from the dock and was leaning over the edge – and yes, you guessed it, my cell phone slid right out of my shirt pocket and ended up on the bottom of the lake.

If you feed the birds, chances are you have a bag of seed sitting in the garage. So now you know what to do if your cell phone ever falls into the toilet or in the sink. Take the battery out of the phone and go stick it in a bag of birdseed!

A quick reminder that there is a guided bird walk coming up later this week, sponsored by the Prescott Audubon Society that is open to the public. This Saturday, Nov. 13, at 8:30 a.m., there will be a bird walk at the Highlands Center for Natural History facility located on Walker Road.