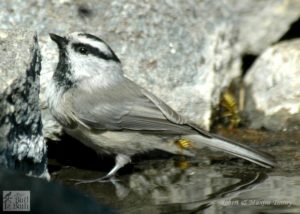 The hobby of bird watching challenges participants to be mindful of the natural world around them. One of the reasons I love bird watching is that birds are everywhere.

If you are observant, no matter where you are there are birds to be seen and heard.

The home in which three of our sons live while attending Brigham Young University has a great yard for attracting wild birds. While there, I spent a considerable amount of time working in the yard, and I enjoyed hearing Mountain Chickadees, Black-headed Grosbeaks, Summer Tanagers, American Robins and the sound which Broad-tailed Hummingbirds make when in flight.

I loved seeing some of the bird species that are present in Provo that we don’t have in Prescott, such as Black-billed Magpies and California Quail. Every time I saw quail they were paired up, but I never saw any baby quail.

There were a few examples of some of our winter birds that were still in Provo, such as White-crowned Sparrows, Dark-eyed Juncos and Yellow-rumped Warblers. I suspect they were in the process of moving north and had stopped over to refuel before moving on.

The biggest surprise for me was seeing America Crows. It appears that this species has established permanent residency in Utah County. This is a new development, as I have never observed crows in Provo in May.

Years ago, when I lived in the same house as I attended Brigham Young University, I would see large flocks of crows in winter, numbering in the hundreds. However, they were always gone well before the month of May. My experience was that crows were strictly a winter resident. It appears they have now decided to stay in Provo year-round, which is very intriguing to me.

It is interesting to see how many varieties of bird species are expanding their ranges. Some of these species are non-native, introduced species, such as European Starlings, Eurasian Collared Doves and House Sparrows.

However, there are many species of native wild birds – like crows – that are expanding their range because of the influence of human activity. For example, historically there would not have been American Robins breeding in Provo, as it was a barren sage brush habitat before it was settled. Now that a thriving urban environment has replaced a sage brush habitat, there are lawns and trees in practically every yard – which is the preferred habitat for robins.

The same is true for many other wild birds that are being aided by the transformation in habitat that occurs when urban areas are developed.

A case study here in Arizona would be Anthem. Before Anthem was developed, the area was an intact, untouched Sonoran-Desert habitat. When most of the original, native vegetation was removed for the development of streets, homes, schools and businesses, the landscaping that was installed was far different from what was there naturally.

This urban area now hosts species such as Great-tailed Grackles, Eurasian Collared Doves and House Sparrows, which would not have occurred there pre-development.

I suspect the crows that formerly wintered in Provo figured out that everything they needed to survive in the summer was present in Provo and they didn’t need to migrate between their former summer breeding range and their winter range.