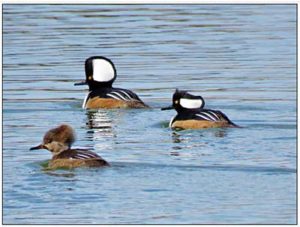 I am sure this comes as no surprise to my reading audience, but I must confess, I did some rare-bird chasing this past week. On Thursday, I went up Copper Basin Road to Aspen Creek Springs, in the Prescott National Forest, to look for a flock of purple finches that had been reported on eBird.

There are many different kinds of finches found in North America. The two main groups that we see in Arizona can be divided into two distinctive colors-finches with red (house finches, Cassin’s finches, purple finches) and finches with yellow (lesser goldfinches, American goldfinches, Lawrence’s goldfinches).

It has been a long time since I have seen a purple finch. I think the last time I saw them was when I was attending a family reunion in Maine back in 2001. I have never seen a purple finch in Arizona in the 50 years I have lived here.

If you have a bird book, I invite you to look up purple finch and look at the range map for this species. It has a very unique distribution. There is a west coast population and an eastern North America population-and in between these two ranges there are hundreds of thousands of square miles where this species does not occur.

My trip to find the purple finches was successful-the birds were very cooperative, affording me excellent looks at them. What was even more interesting was to see a single ‘orange variant’ male. Instead of the normal red color that you would expect to see, it was a dull orange color.

For my second adventure, I went out to Willow Lake after work on Friday to see if I could find another rare bird that had been discovered a few days earlier-a tundra swan. As the name implies, this is not a frequent visitor to Prescott. I accessed the lake from the south shore, off Willow Lake Road, but couldn’t find the swan anywhere.

However, I did get lucky and found another rare bird that had also been reported at this location-a red-shouldered hawk. The distribution of this species is similar to purple finches in that there is a west coast population and an eastern population. I was excited to see the hawk even though it wasn’t my target bird for the day.

On Saturday, I learned that the swan had moved from Willow Lake over to Watson Lake. I figured it was worth a try to go looking for it. This time I found the swan, gracefully swimming in a mixed flock with Canada Geese and other water fowl.

Another interesting bird species I saw at Watson Lake-and on the small pond in Watson Woods-was several male and female hooded mergansers. Male plumage is incredibly striking. They have the ability to raise and lower the feathers on their head. When the feathers are raised, they have a ‘hooded’ appearance that is just absolutely beautiful.

If you get a chance to go to either Watson Lake or Willow Lake in the next few days, you will be rewarded with an amazing variety of birds including gulls, egrets, herons, swan, geese, ducks and even dowitchers. On Friday, I saw 28 long-billed dowitchers at Willow Lake, which is a lot for this time of year. If you have a scope, take it with you. If you don’t, and you’d like to borrow one (or a pair of binoculars) come by the store and I’ll let you borrow mine!