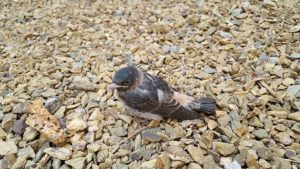 The family of ravens nested in our yard again this year. However, now that the babies are out of the nest, they are being somewhat mischievous—which is not too surprising for ravens. They are so smart! They are incredibly good at analyzing and solving complex problems. In the last two weeks, they have dismantled two of my hanging suet feeders to get at the suet cakes inside.

In one instance, they managed to remove the suet feeder from the wire hook – which I have yet to find – so I have not been able to rehang the feeder. In the other instance, they managed to open the suet cage and steal the entire  suet cake! Talk about greedy. Fortunately, the hook and suet cage were still in place. I have hopefully outsmarted them by using a carabiner, so they cannot open the door of the cage. Let’s see if they can figure that out!

This past week I received a picture and the following message through the Jay’s Bird Barn Facebook page, “Hi. I live in Prescott Valley and was wondering if you could tell me what kind of bird this is? We have quite a few that keep attacking my cat. What can I do about this and why are they attacking?”

Even without the picture, it was pretty obvious who the culprits were—northern mockingbirds. When mockingbirds have an active nest site, they become heroic defenders of the area around their nest. They will not only attack cats, but they will also attack people! They are incredibly brazen; attacking anyone or anything they deem to be a threat to their nest. Mockingbirds will even take on much larger birds, such as ravens, in an attempt to drive them away from their nest.

Mockingbirds are more common in Prescott Valley than in Prescott. However, there are areas in Prescott where they are frequently seen. The only solution to the attacking problem is time. Once the babies fledge and leave the nest, this behavior will go away.

Every year I write about this next topic. I am probably preaching to the choir, but here is my 2016 edition of, “What should I do when I find a baby bird in my yard?” The answer in one word is simple—nothing. Baby birds leave the nest long before most people would think they are ready to be out of the nest. When fledglings leave the nest they typically aren’t very good at flying, so they end up being down on the ground. However, even when they are out of the nest, their parents continue to care for and feed them.

This is a critical time in a baby bird’s life. This is when it is being mentored by its parents on how to detect and avoid predators, how to seek and find shelter, and, most of all, how to find sources of water and food and to forage independently of its parents.

Well-meaning individuals who find a baby bird in their yard and “rescue” it by putting it in a box and bringing it indoors are not helping the bird. It may sound harsh, but the best course of action is to leave the baby bird right where you found it. Leaving baby birds alone gives them the best odds for long-term survival.

Bringing baby birds indoors deprives them of the opportunity of learning the necessary survival skills that you cannot possibly teach them. I realize, if you leave them alone, that they might not survive. However, there is no guarantee of their surviving if you “rescue” them either.