An uncommon ‘common’ visitor shows up at Watson Lake 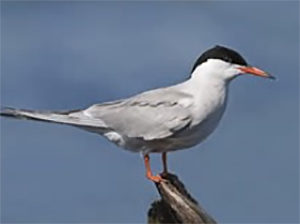 This past week, an astute birder identified a single common tern at Watson Lake. While the name “common” would indicate this species is abundant, that is not true for this part of the country. Common terns are actually very uncommon in Arizona.

Terns have long, narrow wings and fly gracefully over bodies of water, looking for small fish. When they see a fish near the surface of the water, they dive into the water head-first in an attempt to grab the fish with their beak. It is really fascinating to watch their foraging behavior and their hunting technique.

The discovery of this uncommon common tern at Watson Lake was of such significance that the sighting was posted on the Prescott Rare-bird Alert so other serious birders would have the opportunity to rush out and see it. On Monday of this week, the same birder found two common terns at Watson Lake, along with a single Forester’s tern.

After work Monday night, I headed to Watson Lake and saw three terns-presumably the same three terns that had been reported earlier in the day. However, distinguishing which bird was which species was very challenging. Fall plumage for common and Forester’s terns is very similar, making a positive identification difficult.

When the birds were resting on the ground, they were probably at least 400-500 yards away, and even good quality optics were not adequate for a positive identification. The birds took off and started flying over the open water, first in one direction and then in another, swooping and diving, making it even more difficult to get a positive identification on any of them.

I watched them for a long time, but was not confident in my ability to identify any of them. I could have assumed that two of the three terns were common terns, but good birders don’t assume. There is a strong code of ethics to which serious birders adhere. If you are not positive in your identification, you don’t count it. It is better to walk away without affixing a label to a bird at the risk of being wrong. Eventually, all three birds rose up to a great height and left Watson Lake and headed in the direction of Willow Lake, not to be seen again.

The mud flats at the lake were very birdy-there was a good mixture of both permanent, non-migratory species and those that are migratory, including transient species-birds that do not summer or winter here, but just pass through on their way south in the fall and on their way north in the spring.

These are bird species you are not going to see from the comfort of your home. If you want to see them, you need to go where they are. In the morning, the best view of the lake is from the Peavine Trail, as the sun is at your back. In the evening, the best viewing location is the Watson Lake overlook off of Highway 89.

As a reminder, the submission period for our annual wild bird photo contest continues until the end of the month-the deadline is 5:30 p.m. on Sept. 30. The exhibit is free and opens to the public on Thursday, Oct. 1. Visit the Jay’s Bird Barn website at www.JaysBirdBarn.com for more information.