The Triple Crown in birding 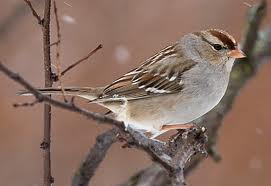 White-crowned sparrows are one of the most abundant winter resi-dents in the central highlands of Arizona. Adult males and females are easy to identify – they have a bold pattern of black and white stripes on the crowns of their head.

In winter, on a rare occasion, the Prescott area is visited by a close relative of the white-crowned sparrow – the white-throated sparrow. The pattern on the head is similar, but there is a small amount of yellow between the beak and the white stripe over the eye.

Also in winter, on an even rarer occasion, Prescott will get a golden-crowned sparrow. This species is similar in appearance to both the white-crowned and the white-throated sparrow.

This past week, for the first time in my life, my wife and I made a trip over to Bosque Del Apache in central New Mexico to behold the spectacle of wintering snow geese and sandhill cranes. It was a tremendous experience – it lived up to everything I have ever heard about Bosque Del Apache.

Seeing thousands of geese and cranes in flight, listening to their vocalization, observing their behavior – particularly when birds of prey were present – was the birding experience of a lifetime.

However, the biggest surprise was not in the wetlands, but at the beautiful visitor’s center where they have several water features and seed feeders. Flocks of songbirds were availing themselves of the seed and water including American goldfinch, Gambel’s quail, spotted towhees and white-winged doves.

Among all of the birds coming and going constantly was the Triple Crown. I saw three sparrow species in the same genus: white-crowned, white-throated and a golden crowned. It was exciting to see a golden-crowned sparrow, as this species typically winters along the Pacific coast. Seeing one in the middle of the desert in New Mexico was surprising.

There was another trio of birds, another “triple crown,” that I was specifically looking for on this trip – at the summit of the Sandia Mountains east of Albuquerque. At 10,678 feet, Sandia Crest has a lodge where they feed rosy finches in winter. For years, I have heard stories of individuals experiencing the thrill of adding all three rosy finch species to their life list at the crest.

One of my Prescott customers was there just a week earlier and saw the finches and took great pictures of them. I just knew it would be as simple as driving up the mountain, walking into the lodge, looking out the window at the feeders, and I would experience the pleasure of adding three new birds to my life list. Sounded simple enough.

After waiting for over two hours and not seeing any of the rosy finches, three of us decided to go looking for three-toed woodpeckers, while my wife, Gayla, stayed at the lodge. As luck would have it, the finches made a brief appearance while we were off tromping through the snow! She said the finches filled the tray feeder and were lined up on the railing. By the time we got back, the finches were long gone! Now my wife, who is not a birder, can “crow” over seeing a bird species that I have never seen!

A quick reminder: Today, Thursday, Jan. 23, is the Prescott Audubon Society’s monthly membership meeting. Chris Poppenberger, a Wildlife Manager with the Arizona Game and Fish Department, will speak about javelina. The meeting is open to the public and starts at 7 p.m. in the fellowship hall of Trinity Presbyterian Church at the corner of Park Avenue and Copper Basin Road in Prescott.