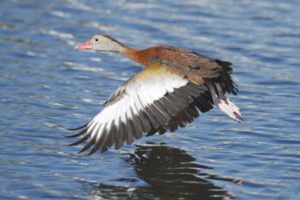 This past Saturday I had the opportunity to take three individuals birding to the south shore of Willow Lake on a private guided bird walk. I had not been out to the lake for two weeks so I didn’t know what might be there in the way of birds, but I had high hopes.

The birding exceeded my expectations – it was so good! One of the first birds we spotted was the rare black-bellied whistling duck that was first reported two weeks earlier. According to the most recent edition of Carl Tomoff’s “Birds of Prescott” checklist, this is an “accidental” species, which means this species has been observed in Prescott five or fewer times over the last 30-plus years. Fortunately, I had my spotting scope with me, so we were able to get great looks. Our day was off to a good start.

Another unusual bird at the lake was a juvenile ring-billed gull. This is a species that is listed as a “common transient.” The designation “common” is easy enough to understand, but what does “transient” mean? In the checklist, the definition for transient is birds that are present during spring and/or fall migration.

This raises the question of “when is spring migration over?” Our bird walk was on June 28. In my opinion, we were well into summer – and one would think that spring migration would be over.

As we walked around the lake, we were alerted to a zone-tailed hawk flying overhead as it was being harassed by a group of red-winged blackbirds. Zone-tailed hawks are listed as a local, rare summer species, meaning their occurrence is in localized areas, and not widespread.

Continuing our walk, we found a stunning male yellow-headed blackbird. This is a species that is not typically seen in Prescott in summer. Referring to Carl’s checklist, it is listed as an “accidental species” in summer, meaning five or fewer records! We were on a roll.

The next discovery was a group of three Wilson’s phalaropes. I was excited, as this is another example of a “fairly common transient” species that passes through Prescott during spring or fall migration, but it is unusual to have them here in summer.

Another exciting find was a small group of black-necked stilts. As their name implies, these are long-legged wading birds found in shallow water. Willow Lake is certainly shallow these days! They are listed as a “fairly common transient” and “casual” in summer.

Far away in the distance, but visible with the scope, I found two white-faced ibis. This is another example of a species listed as a “fairly common transient,” but again, it is late to have to have transient species here.

Eventually the heat of the day got to us, so we headed for the car. Nature, however, had one more final surprise for us – a yellow-billed cuckoo, flying from one small stand of trees to another.

Fortunately, it didn’t go too far, and when it stopped I was able to get it in the scope for all to see and enjoy. This species is listed as a “casual transient” and as “casual in summer.” I was super happy to find it, as I hadn’t seen this species yet this year, so I was able to add it to my “Big Year” state list – species number 241 for the year.

It was a great morning, and it reinforced for me the thrill of birding. Every time you go out you never know what you might see!