Thrashers, known for mimicry, come out in February and March 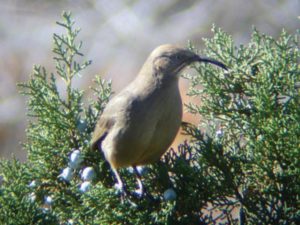 Arizona is home to a variety of thrasher species. Thrashers are in a family of birds referred to as mimids and are well known for their singing and their ability to mimic other birds’ songs. Northern mockingbirds for example are in this family.

In “The Sibley Guide to Birds,” David Sibley writes, “These medium-size long-tailed songbirds are generally solitary. They forage mainly on the ground, using their long, sturdy bills to toss leaves and sticks, raking the dirt in search of food. Most species frequently run on the ground with their tails raised; they will often run to escape danger rather than flying.”

The months of February and March are a really good time to go looking for thrashers. This is the time of year when they start to sing for hours on end to establish breeding territories and to attract a mate. A recent outing around the north shore of Willow Lake turned up several singing Crissal thrashers in the chaparral habitat between the zoo and the boat dock.

Last week on my way to work at the Sedona store, I pulled off Highway 89A onto Page Springs Road, and within minutes of exiting the car I saw several sage thrashers. At one point, I was looking at three sage thrashers at the same time!

The next day I went down to the desert west of Phoenix looking for lowland thrasher species, specifically Bendire’s and Le Conte’s. I saw and heard numerous Bendire’s thrashers and I saw several Crissal thrashers, but missed seeing the Le Conte’s.

At the intersection of Broadway and 91st Avenue, there is a huge dairy operation with thousands of cows. Because of all the grain and feed that is being fed to the cows, there were literally thousands and thousands of birds at the dairy. I observed hundreds of yellow-headed blackbirds mixed in with huge flocks of red-winged blackbirds. Watching these two species through binoculars was just a spectacular sight. I was also surprised to find a large number of black vultures at the dairy. I wasn’t aware that they came so far north in Arizona. At the Tres Rios wetlands area I saw American pelicans. Needless to say, I had a good time birding!

The festival includes workshops, seminars, field trips and a keynote speaker. This year’s keynote speaker is Greg Miller, one of the people that the movie “The Big Year,” starring Steve Martin, Jack Black and Owen Wilson, is based on.

Tickets can be purchased at Jay’s Bird Barn in Prescott or Sedona. For more information, go to www.birdyverde.com.

If you are wondering how to get started with bird-watching, we have two free field trips coming up over the President’s Day holiday weekend. Call the store at 443-5900 to sign up and join us on one of the bird walks. We will be visiting private residences as part of the Great Backyard Bird Count to see how they attract birds to their yards. The bird walks will be on Friday and Saturday, Feb. 14 and 15.