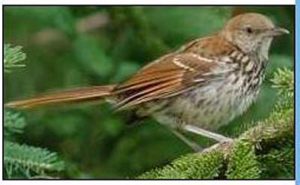 Over the last week or two, there have been several rare bird sightings throughout Yavapai County. One of the more unusual finds was a brown thrasher at Page Springs, just off Highway 89A. I work in Sedona every Tuesday, and on my way home this week I made a point to swing by to see if I could find it.

Fortunately, I had good directions of the area where it has been observed-just beyond the Bubbling Ponds in a thicket of Russian olive trees along the Blackhawk Trail. With effort and persistence, I was successful in finding it.

This is only the second time I have seen a brown thrasher in the state of Arizona. The first time I saw one was at a customer’s home in the Granite Oaks subdivision in Williamson Valley. It showed up at their backyard bird feeder several years ago and ended up spending most of the winter. It came back two more years and never was seen again. These rare, isolated occurrences are an indication of just how uncommon this species is in Arizona.

While seeing a brown thrasher in Arizona is a big deal, several different thrasher species occur in Arizona, either as permanent, year-round residents, or as winter visitors. The Sibley Guide to Birds book states that thrashers are “long-tailed songbirds” that “are generally solitary” and, “they use their long, sturdy bills to toss leaves and sticks, raking the dirt in search of food.”

The most common thrasher species in the Prescott area is the crissal thrasher. Even though it is a year-round resident, few people see them as they are such skulkers. They are typically found in chaparral and pinyon/juniper habitats where they spent most of their time down on the ground in the underbrush, using their long, curved beaks to thrash in the leaf litter looking for food.

Another thrasher species found down in the desert is the Bendire’s thrasher, named after Charles Bendire, a German immigrant who served in the army in the 1800’s and collected bird specimens and bird eggs in western North America. I used to see these species in my yard in Tucson, as well.

Sage thrashers are a fairly common winter visitor throughout much of Arizona. Over the years, I have had good luck finding sage thrashers along Page Springs Road.

Thrashers are in the Mimidae family and are referred to as mimids. This family also includes northern mockingbirds, which are abundant in parts of Arizona. Mockingbirds are known for their ability to imitate the calls of other birds – which has given rise to the expression of being a mimic. One characteristic that all thrashers have in common is their ability to sing beautifully.

If you are interested in observing some of these birds that I have written about today, I invite you to attend the weekly free bird walks we offer at Jay’s Bird Barn.