There’s a hoot-owl howling by my window… 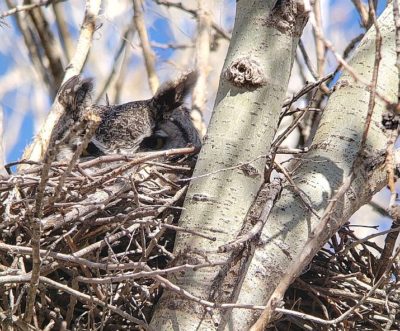 This a great horned owl on its nest in Watson Woods. (Courtesy)

Over the last few days I have been experiencing the lyrics to Michael Murphy’s hit song from the 70’s, ‘Wild Fire’, as “there’s been a hoot-owl howling by my window now, for six nights in a row.” Actually, to be a little more accurate, there have been two great horned owls hooting around our yard this week.

Even with all of the doors and windows closed, we can hear the pair each evening and early in the morning. The male’s call is deep and loud—it almost seems to resonate—while the female makes a shorter, higher-pitched vocalization. Their back and forth calling to one another is referred to as ‘dueting’. This prolonged exchange of vocalizations is probably related to courtship behavior, and likely plays a role in establishing their territory.

Great horned owls are fairly common in the Prescott area, and seem to adapt and even thrive in urban environments. Over the last several years, there have been several great horned owl nests in the Prescott area in some really high-profile locations. Some of these unexpected locations include a nest on the Courthouse in downtown Prescott, in the garden center at Lowe’s in Prescott, and in the garden center at Home Depot in Prescott Valley.

We have a large ponderosa pine tree in our yard where a pair of ravens has nested for more than a decade. My first thought when I heard the owls was that perhaps they were scouting out the raven’s nest as a potential nest site for themselves. However, it seems late for great horned owls to start nesting.

While the owls have been hanging around during the night, the ravens have been busy fixing up their nest during the day! I have been watching the ravens this week making repeated trips to the nest each time with a beak full of sticks. Almost nine months have passed since they last used their nest, and our winter weather has taken a toll on its condition. It is not in move-in condition; it is more like a fixer-upper right now.

Over the last few years, we have also had a pair of Cooper’s hawks nesting in a neighbor’s yard in our cul-de-sac. There has been a lot of fighting and chasing during breeding season, as the ravens and hawks are mortal enemies. I can’t imagine what it will be like if the owls nest nearby! Between the ravens, hawks and possibly owls, we’ll need a referee to keep everyone in his own corner.

On Sunday of this week, I was surprised to see my first broad-tailed hummingbird of the season at one of my feeders. With all of the recent hummingbird activity in my yard, I have already put out a third feeder.

Even though one feeder would have the capacity to hold enough sugar water to feed all of the hummingbirds visiting my yard right now, several feeders are necessary to make it possible for the birds to eat without getting harassed. We all know how territorial and aggressive the hummingbirds can be!