The Rufous are coming! 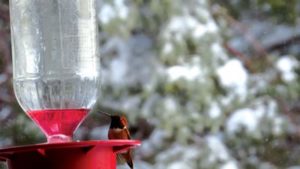 Last week, I received a phone call, an email, and a personal visit in the store from three different individuals who were each reporting the occurrence of a Rufous hummingbird in their yard. Wow, that seems really early! But, then again, they have a long way to go!

We all know how aggressive and territorial hummingbirds are. There is a competitive advantage for hummingbirds to come back early. If they are the first to arrive at a home with a hummingbird feeder, they lay claim to the feeder and the surrounding habitat. When other hummingbirds come back weeks later, they are harassed, chased and prevented from frequenting the feeder.

Rufous hummingbirds are not a breeding species in our area – they are considered a transient species. They neither winter nor summer here; they just pass through our area on their way north in the spring and on their way south in the fall.

The month of August is the peak season for migrating hummingbirds. It is during August that you can experience a feeding frenzy at your feeders with Anna’s, black-chinned, Rufous, broad-tailed, and occasionally calliope hummingbirds all “tanking up” in preparation for migration. By mid-September, most of the hummingbirds are gone with the exception of lingering Anna’s.

While it may seem early, I would encourage you to get at least one hummingbird feeder out right away. It wouldn’t surprise me if your feeder is discovered in just a day or two. Gradually, as more and more hummingbirds start showing up, you can put out more and more feeders. Don’t be surprised if a woodpecker tries to take advantage of your hummingbird feeder – they also love the sugar water solution.