The return of Swainson’s Hawks 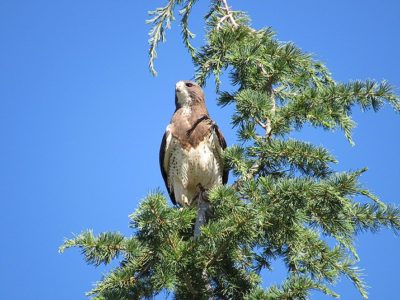 Over the last week or two, I have been engaged in an exchange of emails with a customer who lives in Prescott Valley, near 89A and Viewpoint Drive. Our email conversation is directly related to the content of last week’s column regarding migration—what birds are arriving, leaving and staying.

The emails started on March 28th when the customer wrote and asked, “Has anyone seen any Swainson’s hawks yet?  We are awaiting the return of the pair that nests in the Cottonwood out front.  They have nested here for the past three years, last year raising two chicks to adulthood.  But this year they seem to be a few days late, and we are becoming concerned.”

I wrote back, “No, I haven’t had any reports of Swainson’s hawks yet.  Please keep me posted on their arrival, as I’m curious.”

Five days later, on April 2nd, I received another email.  He wrote, “There is still no sign of our Swainson’s pair.  However, yesterday morning we observed a lone, rather dark Swainson’s hawk perched high in the cottonwood, sitting in and around the crumbling nest, for an hour or so.  It should be noted that one of the chicks from last year’s brood did have somewhat darker plumage than the rest.”

“When the darkish bird departed yesterday morning, I watched it from the front porch.  It circled the tree, let out a rather muted cry, and flew low over our house, heading toward the northwest.  This is exactly the same vector and altitude that the previous Swainson’s had always used when leaving the tree.  So, we suspect that this bird may well be one from last year’s brood.  If so, that too would be exciting and interesting.  Meanwhile, if anything else happens, I’ll send you an update.”

I wrote back, “Wow that is so interesting.  It very well could be one of their offspring.  I still have not heard any reports of Swainson’s hawk sightings, so I wouldn’t give up on your bonded pair yet; they might just be a little late.  Do you keep track each year of the date they arrive?  It would be interesting to track from one year to the next.”

Two days later I received the following email, “We can mark our calendars for another year!  ‘Our pair’ has officially returned to the nest.  Saw them this morning, April 4th, a full week and a half later than last year.  One of them had something in its mouth, don’t know if it was breakfast or a twig for rebuilding the dilapidated nest.  They have a lot of work to do.”

My response, in short was, “So glad they made it back safely!  What an amazing journey, thousands and thousands of miles.” (They winter in Argentina!)

Interestingly, the very next day, I observed my first Swainson’s hawk of the year—at the same location where a pair has nested in Prescott for several consecutive years.  The location is in a non-native pine tree on the front lawn of the Church of Jesus Christ of Latter-day Saints, located at 1001 Ruth Street in Prescott.

The arrival of Swainson’s hawks is certainly another example of the unfolding of the miracle of migration.  Millions and millions of birds are on the move right now, from their winter to their breeding range.  Enjoy the show!