The marvel of development inside an egg 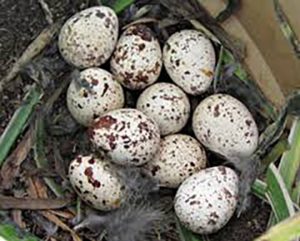 Few things are as amazing as the development of baby birds inside an egg. To think what happens in an egg – and how quickly that development takes place – is just incredible!

There are two words describing the degree of development in young birds inside an egg – precocial and altricial. Gambel’s quail is a good example of a common bird species in our area that illustrates precocial development.

When female quail are producing eggs, they typically lay one egg per day. Quail nests are usually nothing more than a shallow scrape in the soil, often under shrubbery or bushes which provide dense cover and protection from predators. Clutch size for quail is highly variable, but is typically between 10 and 15 eggs. I have had reports of clutches upwards of 18 eggs!

Each day, the female will discreetly make her way to the nest to avoid detection by a predator. She deposits an egg in the nest, and then leaves moments later, leaving the nest and eggs unattended. She does this each day until she has finished laying all of the eggs that will make up the clutch. When she is completely done laying all of the eggs, she then begins the incubation process.

As the eggs sit unattended in the nest, they are dormant, so no development is occurring inside of the eggs. The absence of heat does not affect the eggs, and it is not until the female begins to sit on the nest and heat is consistently present that the eggs begin to develop.

This method of incubation ensures that while the eggs may be laid as much as two weeks (or more) apart, they will all hatch within a few hours of each other. The incubation process starts at the same time for all of the eggs, regardless of when they were laid. Pretty amazing!

The incubation period for quail eggs is about 21 days, the same as for chickens. When quail hatch out, they are completely covered with a downy coat of feathers, their eyes are open, they are capable of running around and they can feed themselves—all within hours of hatching.

While precocial species experience advanced development within the egg, their development after they hatch is much slower than altricial species. Baby quail will not be fully grown or obtain adult plumage for several months after hatching. This characteristic is true with many different bird species that produce precocial young, such as ducks, geese, pheasants and grouse.

There is a stark contrast between precocial development, which occurs primarily inside of the egg – and altricial bird species. Most songbird babies, such as house finches and lesser goldfinches, have altricial young, meaning there is minimal development within the egg.

In altricial bird species, when the babies hatch their eyes are still closed, they are usually naked, and they are completely dependent upon their parents for food. However, their development outside of the egg is unbelievable. Birds such as mourning dove, wrens, warblers and sparrows go from being completely helpless at hatching, to flying in about two weeks!

If you see a baby bird out of the nest, my recommendation is to leave it alone. Chances are, the parents are not far away and they will continue to care for their fledglings once they leave the nest. Trying to put a bird back in the nest or bringing it indoors is not recommended. Good intentions to “help” usually result in negative consequences for the bird, so it is best to let nature run its course.