The importance of sharing rare and unusual bird sightings 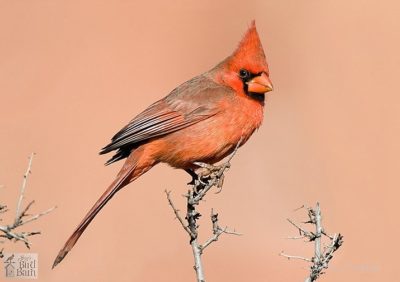 This past week, we had a surprise visitor to our yard — a male northern cardinal. What a special treat! Our home is near Eagle Ridge off of Rosser Street in Prescott, and we have lived at this location for 13 years. This is the first time, to my knowledge, that we have ever had a cardinal in our yard.

I normally leave for work before 7 a.m., but on this particular day I was still home then when I heard the cardinal singing its beautiful, distinctive call. I grabbed a pair of binoculars, slipped out the back sliding door, and saw it briefly before it flew away. Had I not been home at that precise moment, I never would have seen it.

I can’t help but wonder how many different varieties of birds I’ve missed over the years. Not because the birds have not been in my yard, but because I wasn’t at home or I was in the house when something unusual showed up. As most experienced birders know, timing is everything.

When we first moved to Prescott in 1991, we lived near Acker Park, south of Gurley Street. One year while living at this home, we had a female cardinal show up in November and it stayed until March. This was the only time in the 15 years we lived at that location that we had a cardinal in our yard.

I have been aware of small, localized populations of cardinals in the Prescott area for several years. Cardinal sightings are most common in the area near Pleasant Valley and Jack Drive, near Sequoia and Smoke Tree, and in Diamond Valley.

I have to think it is likely that there are far more occurrences of unusual bird sightings in our yards, but perhaps we are not home at the time or we are not aware of the birds in our yard because we are in the house.

Over the years I have documented several uncommon bird species in my yard, such as a yellow-billed cuckoo, a hooded warbler, and an ovenbird. Several years ago I had a male Costa’s hummingbird show up, and it stayed for six days. On another occasion, a female broad-billed hummingbird showed up and stayed 11 days.

On a very different note, I want to share the sad news of Dena Greenwood-Miller’s losing battle with Leukemia. Dena passed away on Monday, June 11, at the age of 62. Dena was the store manager for the Sedona Jay’s Bird Barn location from 2010 to 2017. Many individuals in the Prescott area have known Dena over the years through her involvement in the Audubon Society and the Verde Valley Birding and Nature Festival.

Dena was a beautiful soul who touched the lives of so many people as she helped them experience the wonder and beauty of nature. We are deeply saddened by her untimely death. She will be greatly missed by the birding community in the Verde Valley, throughout northern Arizona, and by her Jay’s Bird Barn family. We express our condolences to her dear husband, Randy, and family.