The Great Backyard Bird Count is this weekend 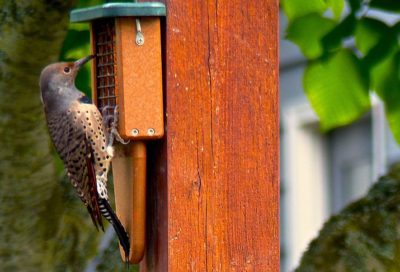 Last week, I wrote in my column that I hadn’t seen any hummers at the feeders yet.  I added that I’m not home very much during the day, so I could have a hummer and not even realize it.  The very next day, I saw three hummingbirds at the same feeder at the same time!  In spite of our cold, unsettled weather, they are back!

This Presidents Day weekend is the annual Great Backyard Bird Count sponsored by the Cornell Lab of Ornithology.  This is your chance to participate as a “citizen scientist” — in the comfort of your home, in your yard, or out in the field.

Thousands of individuals participate in this event each year, which begins on Friday, Feb. 15, and ends on Monday.  You can participate on any or all of the days.  It is as simple as identifying each of the bird species you see in your yard, and counting how many of each species you see at any one time.

The next step is to log onto the bird count website at gbbc.birdcount.org and submit your data. As you might imagine, with thousands and thousands of people submitting data from every state in the nation, as well as from many foreign countries, the information submitted gives scientists at Cornell a snapshot of where, how many, and what kinds of birds are occurring throughout the world.  How cool is that?

If you need help identifying the birds you are seeing in your yard, I invite you to pick up a copy of the Sibley’s folding guide, “Birds of the Arizona Central Highlands” here at Jay’s Bird Barn. This quick reference guide is beautifully illustrated, easy to use, and contains all of the common varieties of birds found in this area.

Now in its 22nd year, the Great Backyard Bird Count has gathered some really amazing information. I invite you to get on their website and review the results from previous years.  For example, in 2018, a total of 180,716 checklists were submitted, 6,459 different species were observed, and a total of 28,908,016 individual birds were counted!

A quick glance of the bird species most frequently reported reveals that the majority of the checklists submitted were from eastern United States. Are you curious to know which state submitted more checklists than any other? It was actually California, but seven of the top 10 states submitting checklist were in the east.

Another interesting statistic is the most numerous bird species observed. Can you guess what it was?  Snow goose, which came in at 4,957,116!  The second most numerous species reported was Canada goose at 1,626,585!

The Great Backyard Bird Count is an international event — it is open to everyone no matter where they live. In 2018, the country that submitted the highest number of checklists was —as you might imagine — the United States. Rounding out the top 10 in order were Canada, India, Australia, Spain, Mexico, Costa Rica, Portugal, United Kingdom and Columbia.

I encourage you to participate this weekend, even if you only participate on one of the four days.  The guidelines, which are all online, only require spending fifteen minutes counting on one day — so it is definitely not a big time commitment.

Until next week, happy counting and happy birding!