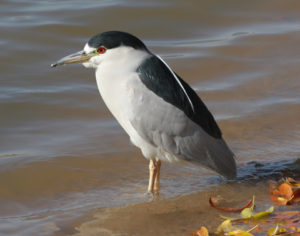 As you might imagine, I field a lot of interesting phone calls about unusual bird sightings. Sometimes, the caller knows the correct identification of the bird he or she is calling to report. Frequently, the caller is seeking help to identify what is being seen in their yard.

Last Friday, I received one of those phone calls where someone was reporting a rare bird. I knew the caller well, and trusted her birding knowledge, but was somewhat skeptical about what she said she was seeing in her yard.

Second, referencing Dr. Carl Tomoff’s “Birds of Prescott, Arizona” checklist, this species is listed as an “accidental” species in winter. This means this species has been seen in Prescott fewer than five times in the last 40 years! I wasn’t going to just accept the identification without seeing it myself, so I agreed to stop by her house and take a look.

Arriving at the house, I was ushered out the back sliding door where there was an absolutely huge alligator bark juniper tree. Up in the lofty branches of the tree was indeed a black-crowned night heron trying to ride out the impending storm and its associated winds.

I have to admit, there are times when I don’t mind being proven wrong, and this was one of those times. Birds are a funny lot. Just because a range map in a field guide or a checklist indicates where and when they should occur, there will always be exceptions to the rule.

A few other recent examples of uncommon birds in the area – all from Willow Lake – include a lone tundra swan (the name should give you an indication of where it breeds), four snow geese (another artic-dwelling species) and a lone white-tailed kite.

I saw two male Anna’s hummingbirds at Willow Lake this past week about 100 feet from one another, each singing their scratchy tune. The arrival of hummingbirds over the last two weeks has prompted me to make up a fresh batch of sugar water. I put up two feeders this past week – one in the front yard and one in the back yard. Let the fighting begin.

The rule of thumb in birding is to expect the unexpected. I think that is part of the allure of birding – seeing something new, or unusual, or out of place that isn’t expected.

If you are wondering how to get started with bird feeding or bird watching, we have three free field trips coming up over the President’s Day holiday weekend. Call the store at 443-5900 to sign up and join us on one of the bird walks. We will be visiting private residences and seeing how they attract birds to their yards.

We are still looking for some homeowners who are willing to host small groups of birders for the Great Backyard Bird Count. If you would like to host a group, call the store. The bird walks will be on Friday, Saturday and Monday, Feb. 14, 15 and 17.

Please join us this Saturday for food, friendship and camaraderie from 10 a.m. until 2 p.m. at our Prescott Jay’s Bird Barn location as we celebrate our Re-Grand Opening. Until next week, Happy Birding!