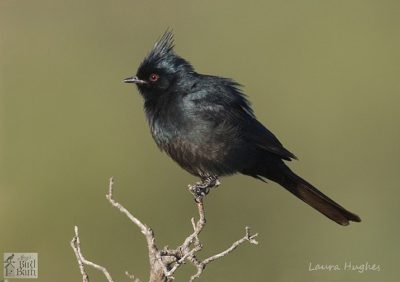 Now that we are officially in summer, you might be wondering if you can expect any changes in the bird activity in your yard. The short answer is not much. However, there are definitely a few things to be on the lookout for.

— Baby quail. Breeding season for Gambel’s quail runs from May through the end of August. It is important to remember that breeding occurs in a season, and is not necessarily a singular event. If you haven’t seen any baby quail yet, don’t despair! There is still a lot of summer left.

— Phainopepla. This is a very unique bird of the Arizona Central Highlands. It actually belongs in a family referred to as “silky flycatchers”. We typically think of flycatchers eating flying insects, but species in the silky flycatcher family prefer a diet of berries and insects.

Phainopepla have an interesting breeding behavior. Most birds don’t breed until after they have migrated back to their summer range. But, this species lingers in its winter range, and breeds there in spring before migrating. After raising their brood they migrate to their summer range and breed a second time. Be on the lookout, as they are moving back into the area.

This is a species that does not summer or winter in Arizona — it is considered a transient species, passing through in the spring on its way north and again in the fall on its way south. When we start seeing them in early July, this means they are already making their way south. While it seems early for migration, this is the pattern we observe each year.

— Increased hummingbird activity at feeders. Hummingbird numbers will start to build in the month of July, reaching a crescendo in August. The source of this increase can be attributed to two factors; 1) migrating birds moving south, and 2) more hummingbirds due to all of the offspring produced during breeding season.

— Post-breeding dispersal. When mated pairs are busily rearing a nest full of babies, they don’t stray far from their territory. However, once they become empty nesters and are no longer constrained by parental responsibilities, they begin to move outside their traditional breeding territory.

In July and August, we begin to see birds that we saw earlier in spring, but perhaps haven’t seen since. Don’t be surprised if you start seeing black-headed and blue grosbeaks and orioles after they have finished rearing their young.

— Diminished seed consumption. Seed-eating varieties of birds consume less seed in the summer time. This is because the adults have switched their diet to insects while they are in the throes of rearing their young. As summer progresses and fledglings gradually leave the nest, seed consumption will increase as juveniles join their parents at feeders.

On a separate note, two weeks ago I mentioned the lone raven that fledged from the nest in our yard. Earlier this week, my wife was on a walk in our neighborhood, and she discovered a dead raven not far from our home. I think it was probably the juvenile, as I’m still seeing the parents in our yard daily, but I haven’t seen the fledgling for almost two weeks.