Subspecies within a species 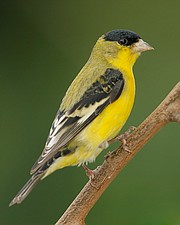 When referencing field guides it is not uncommon to see wild bird species divided into subspecies, which are frequently referred to as “races.”

While all of the different subspecies are currently lumped together into one species, there is the possibility that at some point additional scientific study might result in some, if not all, of these subspecies being broken out into their own separate and unique species.

Did you know there is a wild bird species in our area that has more than one race? It is our very abundant lesser goldfinch. Most of us think of male lesser goldfinches as having a greenish back with a black patch on the crown of the head, and prominent white patches in the wings that are especially visible in flight. This is considered the “western” race that we typically see here in the Central Highlands area of Arizona.

However, there is a subspecies of lesser goldfinch shown in the Sibley Guide referred to as the “Texas” race. Males of the Texas race have an entirely black back instead of a green back. It is actually a very striking bird, with the vivid contrast between its lemon-yellow breast and its jet-black back.

This week I had a male Texas lesser goldfinch in my yard competing for a vacant spot on the nyjer feeder (good luck with that!) and it stood out as being so different from all of the other western lesser goldfinches at the feeder.

It was fun to see the variation in plumage and coloration of the Texas race compared to the western race of this species. I don’t have any scientific numbers, but I am confident that the Texas race makes up just a percent or two of all of the lesser goldfinches we see here in the Central Highlands area.

Earlier this week, I reflected on how it was exactly a year ago that we released the “Sibley’s Birds of the Arizona Central Highlands” folding guide. The guide has been so well received, and I feel it has been a game-changer in making bird identification easier for the casual, backyard birder.

Now that it is September, I want to promote our ninth annual Wild Bird Photography contest. The submission period started on Sept. 1 and runs through Sept. 30. We encourage anyone and everyone to submit pictures for this fun, annual event. Photo contest guidelines are available for review on the Jay’s Bird Barn website at www.jaysbirdbarn.com.