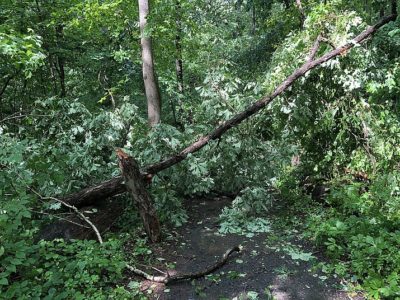 Gayla and I have been in Virginia this past week visiting our son, Jeremy, and his family. We’ve enjoyed being “GG” and “Grampy” to two of our beautiful granddaughters.

While in Virginia, I spent a lot of time birding at the following locations — Runnymede Park in Herndon, Fairfax Lake in Reston, Ellanor C. Lawrence Park in Chantilly, and Great Falls Park in Great Falls. We also enjoyed a Memorial Day weekend road trip to Chesapeake Bay!

While at the beach I added an interesting variety of birds to my Virginia list, ranging from brown pelican to brown thrasher, and a lot of unique birds in between such as purple martin, least tern and semipalmated plover.

Early one morning, I visited First Landing State Park in Virginia Beach and really enjoyed the trails and habitat. I’ve never birded in an area with bald cypress and Spanish moss — what a beautiful environment! It was here that I saw a stunning prothonotary warbler. This was only the second time in my life to see this species in North America. Interestingly, the first time I saw one was in the small pond in Watson Woods, right here in Prescott!

Last Thursday I had a life-threatening experience while birding at Ellanor C. Lawrence Park. I parked quite a distance from the Visitors Center and took a series of trails that led me to the building. There, I received directions on where to go to look for some specific target birds I was hoping to see.

It was mid-afternoon and it was a lovely day, when it suddenly started getting dark. Very dark. It was amazing how quickly it went from partly cloudy to very dark. In the distance I could hear thunder, and it was obvious a storm was approaching. By now I was far from the Visitors Center, but I quickened my pace and started heading back.

Tornado warnings had been posted for later in the day, but I didn’t think too much about it. Well, it wasn’t long after it grew dark that the storm hit with an intensity that would rival any monsoon storm in Arizona. I could hear the storm approaching as high winds ripped through the trees, and almost simultaneously the rain began to fall.

I started running — my goal was to get to the safety of the Visitors Center to escape the fury of the storm. The high winds started blowing down huge trees — in front of me, behind me and to the side of me. There was no clear path to safety, so I just ran, knowing that I could have been running right into danger. Trees were crashing down all around me, the rain was pelting me, and violent lightning was striking all around me. I felt like I was running for my life, with no clear options for safety.

In my mad dash, I spotted an open-sided kiosk by the trail that would afford a small amount of protection, so I chose to stop there. I stood on a bench to get as high as I could, and pressed my head up against the rafters. I held on as trees continued to come crashing down, with lightning striking all around me.

It was a harrowing experience, and I am grateful for my safety. I felt the blessings of the Lord in keeping me safe in a time of potentially serious danger. After the storm passed, I made my way back to the car, and was humbled to see the power of nature with downed trees all around. Reflecting on my experience, I don’t think it was a tornado. Rather, it was a violent thunderstorm; perhaps a micro-burst with heavy winds.

Until next week, Happy (and safe) Birding!