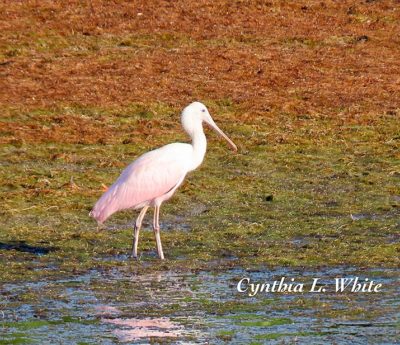 One of the rarest birds ever to show up in Prescott, a roseate spoonbill, was observed at Watson Lake on Aug. 2, 2019. News of this rare bird spread like wildfire, and bird watchers from all over the state have been flocking to the lake to see it. (Courtesy photo by Cynthia White)

I had an amazing time this past week at the Southwest Wings Birding and Nature Festival. Their motto is “The greatest little birding and nature festival in the United States,” and I have to admit—it is a great festival!

The festival is based in Sierra Vista, Arizona at Cochise College—a lovely community college surrounded by native desert scrub.  As part of the festival, I taught an hour and a half long class on optics.  I also led an optics bird walk where participants were able to try out a variety of Swarovski and Vortex binoculars and spotting scopes.

Each location provided an incredible opportunity to see rare and unusual bird species which can’t be seen anywhere else in the United States.  These are species that are more common south of the border, but the range for many of these species just barely extends into southern Arizona.

If you are a serious birder and are trying to add species to your life list, a trip to southern Arizona is a must. Participants at the festival were from all over the country, and for many it was their first time birding in southern Arizona.  Needless-to-say, their experience left them enamored with the region.

For the week I saw 119 species.  Our Vortex sales rep, who is a life-long birder, added twenty-six species to his life list!  I personally didn’t add any new species to my life list, as I have been birding in southeastern Arizona for over fifty years.

It was still a thrill to see so many beautiful, unusual, and rare birds.  A partial list of some of the rarer birds include elegant trogon, Arizona woodpecker, Mexican jay, rose-throated becard, thick-billed kingbird, violet-crowned hummingbird, varied bunting, five-striped sparrow and Lucifer’s hummingbird.

I was very excited to see the five-striped sparrows, as the last time I saw this species was on May 25th, 1974—forty five years ago!  At Miller Canyon we saw giant Rivoli’s hummingbirds, and at Carr Canyon we saw buff-breasted flycatcher, red-faced warbler and painted redstart.

This is a species that normally occurs in the Sea of Cortez, in the Gulf of Mexico, in the Rio Grande Valley and in parts of Florida.  How it got here I have no idea, but I invite you to go see it for yourself.  If you need to borrow a pair of binoculars, come see us at the Bird Barn.

Eric Moore is the owner of Jay’s Bird Barn, with two locations in northern Arizona – Prescott and Flagstaff.  Eric has been an avid birder for over 50 years. If you have questions about wild birds that you would like discussed in future articles, email him at eric@jaysbirdbarn.com