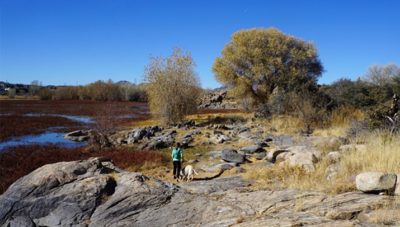 Each day I receive rare bird email alert notifications reporting rare bird sightings by fellow birders in Yavapai County. This past week there were several reports of long-billed curlew sightings—one at Sedona Wetlands in the Verde Valley, one at Prescott Country Club in Dewey, and one at Willow Lake.

This year I have been really good about entering into my personal eBird account a record of all of the bird species I have observed. Year to date I have seen 542 species, and I am continually working on adding to this number. Monitoring rare bird reports is helpful as it makes me aware of birds in the area that perhaps I haven’t seen this year.

On Saturday, after leaving the store, I headed out to Willow Lake to look for the curlew. I got to the lake at 6:45 in the evening — not the best time of day to start bird watching, and the lighting wasn’t that great either. However, I had a great time — I saw 33 species in about an hour’s time. I was delightfully surprised by the diversity of species observed; it exceeded my expectations for this time of year.

The low level of Willow Lake is especially visible in the cove along Willow Creek Road in northeast Prescott. With recent record-low precipitation, Willow Lake has dropped to 8.6 feet below the dam’s spillway. (Cindy Barks/Courier)

Between October and March, Willow Lake hosts thousands of water birds—mostly ducks, but also mergansers, grebes, coots, herons, and a myriad of other bird species in the area surrounding the lake. May and September can also be exceptional months as thousands of birds move through the Arizona Central Highlands and use the lakes as a brief stopover destination to rest and refuel before moving on. However, considering the date—June 30th—I did not expect to see any transient species—migratory birds that pass through Prescott in the spring as they are making their way north, and again in the fall as they move south.

In my mind all of the transient species that pass through here should still be on their summer breeding range at points far to the north of us, be it in Utah, Wyoming, Montana, Idaho or even in Canada. However, there were several transient bird species at Willow Lake this past Saturday such as cinnamon teal, white-faced ibis, willet, and scores of yellow-headed blackbirds.

Based on the date, I would say we are in the middle between spring and fall migration, meaning there should not be any transient species at the lake right now. I would think June 30th is well beyond the time when birds are still moving north, and certainly too early for birds moving south.

But what do I know? And who can be sure where birds will be and when they will be there. Nature is dynamic not static. It is constantly in motion, continually changing. My outing to the lake served as a reminder that one never knows what he will see when he goes birding. For me, it is not knowing what I will see when I go birding that inspires and motivates me.

You might be wondering, did I add species number 543 to my list? No, in spite of all of the birds I saw, I did not see the curlew. That only means I have to go back and try again! In spite of the lack of rain, and the fact the lake is shrinking rapidly, it is still a great place to go bird watching to see an amazing diversity of birds.