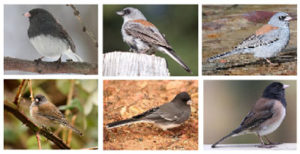 Variable. That is the one word that sums up the difference in plumage in dark-eyed juncos.

As a boy, the “Golden Field Guide” that I frequently referenced illustrated four different junco species that later were lumped together into one species – which is now referred to as dark-eyed junco. There is also a second junco species, found in southeastern Arizona, known as a yellow-eyed junco.

Modern field guides still illustrate each of the different subspecies and show them with their subspecies names, but they are considered just one species. Here is a list of six different junco names you may be familiar with.

• Oregon junco – Probably one of the mostly widely distributed winter visitors in western North America, this subspecies has a dark head, giving it a hooded appearance, similar to the black head of a spotted towhee.

• Pink-sided – This variety is less abundant than the Oregon junco and is characterized by a buff-pinkish wash on the flanks. While the head still has a hooded appearance, it is not as dark as the Oregon junco.

• White-winged – This variety is more commonly found in the central part of the United States and is an uncommon winter visitor to the Prescott area. I have seen this variety in my yard in the past, but not on a regular basis.

• Slate-colored – This subspecies breeds in the northern tier of North America and is common in Alaska and most of Canada in summer. However, its winter range extends to most parts of the United States. The plumage within this subspecies can be remarkably variable.

• Gray-headed – This is a western subspecies that is limited in its range. It looks very different from the four previous varieties – lacking the dark, hooded appearance, and has a brightly colored rufous back.

• Red-backed – This subspecies is even more limited in its range and is actually a year-round resident at the higher elevations in the central highlands of Arizona. It is similar in appearance to the gray-headed subspecies, one difference is a bicolored bill.

In spite of the significant differences in range, distribution, and plumage between the six different subspecies they are considered one species. However, there is one characteristic that is diagnostic in each of the subspecies – white outer tail feathers. When juncos fly up from the ground, you will see a flash of white on both sides of the tail making it very easy to recognize them as being a junco.

Individuals who feed wild birds in their yard in central Arizona typically see juncos between late September and early April. Juncos are in the sparrow family so they are usually seen down on the ground feeding on seeds. Their preferred seed at backyard bird feeders is white-proso millet.

Millet is a very desirable seed by ground feeding birds such as quail, dove, towhees, sparrows and juncos, and can be fed by broadcasting the seed directly down onto the ground. If you do not have a fenced in area where you feed the birds I recommend broadcasting only enough seed in the morning so that by nightfall all of the seed is cleaned up. If you put too much feed on the ground and it is not cleaned up by nightfall you potentially can attract unwanted critters.