September an exciting time for birding at Willow Lake 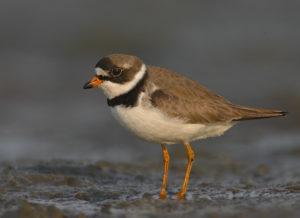 The water level at Willow Lake is currently very low in spite of all the wonderful monsoon rains we have received since early July. Over the last several months, the shoreline has receded several hundred feet from its normal level. The shallow water conditions at the lake have created the perfect habitat for long-legged water birds.

Migration is already underway for a variety of “shore” birds, which use our local lakes as a stop-over point to refuel before continuing on. I belong to an email distribution list for rare bird sightings, and last Wednesday several uncommon bird species were observed on the southern edges of Willow Lake. Fortunately my day off is Wednesday, so when I received the email notification I was able to head out and go look for the birds that were reported.

On this particular day, the rare birds included a semipalmated plover, a snowy plover and some Baird’s sandpipers. Now that is enough to get any serious birder excited! I grabbed my tripod and my Vortex Razor scope and headed out to Willow Lake. The muddy conditions around the edges of the lake prevented me from getting very close to the birds, rendering my binoculars ineffective, and thus making my scope an absolute necessity.

When I arrived at the lake, I was not alone. Other local birders who had received the same rare-bird email notification had already converged on the scene, responding to the exciting news. At one point, there were four of us lined up, each with a complete scope and tripod set-up, along with binoculars and field guides. Obviously, I am not the only crazy hardcore birder around these parts!

The birds were very cooperative, and with very little effort we found each of the species that were reported: semipalmated plover, snowy plover and Baird’s sandpiper, along with least sandpipers, western sandpipers and lesser yellowlegs. I added four new species to my 2012 state list at that one spot, making me very happy that I did not hesitate to go look for the birds.

The months of September and October are a very dynamic time period at all of the lakes in the Prescott area, but especially Willow Lake. Some arriving species are here only overnight, whereas other species will stay for a day or two before moving on. Other arriving species will stay and winter here. I cannot stress strongly enough the importance of getting out to the lakes as often as you can to survey the variety of birds that are showing up, as it literally changes from day to day.

The scene at backyard birdfeeders will begin to gradually change over the next several weeks. You will notice the departure of many of our summer birds. Already the orioles are clearing out, and the black-headed and blue grosbeaks are starting to leave. Hummingbird numbers will change dramatically over the next several weeks, to the relief of many of our customers who are struggling to keep up with the pace of maintaining multiple hummingbird feeders, keeping them stocked with fresh nectar.

Many of the bird species that eat insects – such as warblers and vireos – are on the move right now. Since these species don’t frequent seed or nectar feeders, you aren’t as likely to see them passing through, even though that is just the case. Insect-eating migratory birds are usually found in the foliage of trees and shrubs as they glean for food that will help fuel their migration southward.