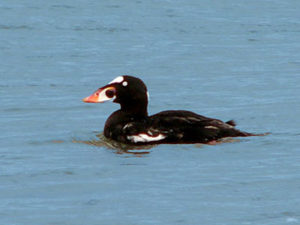 A little over two weeks ago, a surf scoter was discovered at Watson Lake. This rare visitor typically winters in the ocean – as one might gather by the name “surf scoter.”

It was just a year ago when a white-winged scoter was discovered at Willow Lake. It ended up spending most of the winter here, which was very unusual. It is very rare to have two different scoter species in Prescott within the same year.

In all of the years that I have been bird watching in Arizona, this is the first time I have ever seen a surf scoter in Arizona. I was really happy to be able to add it to my 2012 state list – species number 220!

But I didn’t see the scoter at Watson Lake even though I went looking on several occasions – without success. The first time I looked for it happened to be my day off, and I was already out in the field bird watching when I received an email on my phone that a scoter had been discovered. Boy, is it a great time to be a birder – getting instant information on rare bird sightings while out in the field is pretty awesome!

I was just at Willow Lake, so I hopped in the car and drove over to Watson Lake. Not surprising, within minutes of my arrival other crazy birders started showing up, armed with powerful scopes and high-powered binoculars (Just like in the movie, “The Big Year”). As luck would have it, none of us spotted the scoter!

A few days went by with no additional sightings before it was re-discovered at Watson Lake where it had been the previous week. I was actually at Watson Lake when I received the email update that the bird had been seen that very morning. Armed with information contained in the email, I knew right where to look for the bird. After probably an hour of active searching, I finally gave up. I had struck out – once again.

Then, on Monday of this week I received an email from a customer in Sedona. He found a surf scoter at the Sedona waste water treatment plant along Highway 89A just south of Sedona. The email included several photographs, and even identified which pond the scoter was in.

I work at the Jay’s Bird Barn in Sedona every Tuesday, and since I was headed over there the very next day, making a stop to see the scoter suddenly became a high priority. Tuesday morning, on my way to the store, I stopped on Highway 89A and scanned pond number six with my binoculars, and sure enough, it was there.

Having verified that it was there, I got out of the car and set up my tripod and scope to get a better look at the bird. You wouldn’t think it would be very hard to see a bird on an open body of water, but it was actually very challenging as the bird kept diving. It was under the surface of the water for long periods of time in search of food.

When it surfaced, it would spend only a few brief seconds above water before plunging below the surface. Like most diving birds, you never know where they will resurface, as sometimes they pop up far away from where they went underwater. Initially I found it difficult to find with the scope, but when I finally got on it I got great looks at it.