Searching for birds of prey in the Wickenburg area 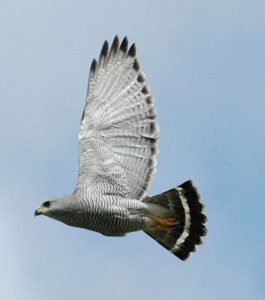 I am in Wickenburg again this week for the second session of a Northern Arizona University-sponsored Road Scholar program that I am directing. We are enjoying great success in finding a variety of birds, and I have added several species to my 2014 state list.

As we have been birding, the one thing that has really stuck out to me is the number of different birds of prey species we have observed. So far we have seen gray hawk, zone-tailed hawk, Harris’s hawk, red-tailed hawk, ferruginous hawk, Cooper’s Hawk, sharp-shinned hawk, and American kestrel, which is a small falcon.

While this is an impressive number of hawk species, there are still several other bird of prey species that I am hoping to see at some point later in the week, such as Swainson’s hawk, common black hawk, and both peregrine and prairie falcon.

Most folks in the central highlands of Arizona are familiar with the common bird of prey species such as red-tailed hawk and Cooper’s hawk. However, riparian habitats in the Sonoran Desert provide the greatest opportunity to see the widest variety of birds of prey.

On Monday, as we were bird-watching in a riparian area, we saw three different Arizona “specialty” hawk species within a 15-minute timespan. We first discovered zone-tailed hawks flying high overhead with several turkey vultures. Minutes later we were watching a pair of gray hawks when we discovered a lone Harris’ hawk. It was difficult to decide which species to focus on!

The recently released second edition of “The Sibley Guide to Birds” indicates there are only about 100 pairs of gray hawks in the entire United States! This species is more commonly found in Mexico, which is also true for the common black hawk, zone-tailed hawk and Harris’s hawk. Each of these species is far more common in Mexico – however, the northern extension of their range reaches into southern Arizona, parts of New Mexico, and into the Rio Grande Valley of Texas.

Avid birders who keep a life list come to Arizona just to see some of these uncommon bird of prey species. The gray hawk was a life bird for all of the participants in this week’s Road Scholar program who are visiting Arizona from all over the country – Oregon, Minnesota, Massachusetts, Maine, California, and even from Canada.

Between last week’s program and this week’s, we have seen other bird of prey species as well such as great-horned owl and greater roadrunner. I am always relieved when we find a roadrunner, as this is often the target bird for many of the participants!

If you are interested in bats, there is a special event, “Wings in the Night: An Arizona Bat Symposium,” this Saturday, April 5, from 9 a.m. to 4:30 p.m. at Embry Riddle University. The event will be held in building AC-1, room 107, and is free and open to the public. Participants are asked to register in advance for the event at www.sites.google.com/a/prescott.edu/wings_in_the_night as a complimentary lunch will be provided.

The same evening there will be a mist-netting demonstration led by Joel Diamond from the Arizona Game and Fish department. This event is also free and open to the public and runs from 7 to 9 p.m. at Watson Preserve. Park at the Rosser Street and Highway 89 entrance and bring flashlights and a headlamp.

I hope to see you Saturday at the bat symposium. Until next week, Happy Birding!