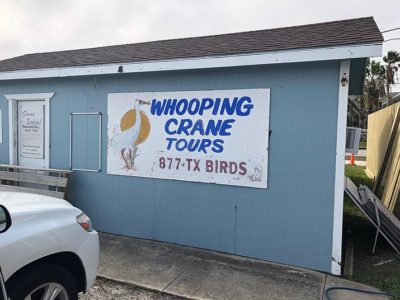 Last week I wrote about my experience birding in the Granite Basin area as part of the Prescott Audubon Society’s annual Christmas Bird Count.  The very next day I flew to Corpus Christi, Texas to participate in the Rockport Christmas Bird Count.  Rockport, as you may recall, was where the eye of hurricane Harvey came to shore last year.

Rockport is an important area for one of North America’s rarest bird species—the whooping crane.  Whooping cranes summer in far northern Canada in Wood Buffalo National Park, and then winter in salt water marshes in and around Aransas National Wildlife Refuge in Texas.

This is a species I have wanted to see my entire life, but until last week I never had the opportunity to do so.  Why was I so excited to see a whooping crane in the wild?  This is a very rare and endangered species.  There are only between three and four hundred whooping cranes in the world!

Back in October, I was invited by the Naturalist Manager of Swarovski Optiks to come down to Rockport and participate in the Christmas Bird Count.  Initially I thought there was no way I could do this, but the more I thought about it, the more tempting his invitation became.

I flew to Texas on Thursday, December 21st, and flew home on Friday, December 22—and it was worth it!  I may have only added one life bird to my life list, but it was one of those moments that will forever remain in my memory.

Whooping cranes are very impressive—they are the tallest bird in North America.  They are about 52” tall, and they have an 87” wing span!  An adult whooping crane plumage is mostly white, with black wing tips and a red crown patch.  It is a striking bird.  Breeding pairs stay together with their chick on the winter range, and I was able to see multiple family groups.

I don’t know the exact number, but I estimate that I saw close to fifty whooping cranes—about one-sixth of the entire world’s population!  It was indeed, a very special day.

To observe the cranes, we took a chartered boat that traveled a course paralleling the National Wildlife Refuge.  In addition to the cranes, we saw probably seventy or eighty other bird species.  We observed literally thousands and thousands of birds, ranging from tri-colored herons, reddish egrets, little blue herons, white ibis and white and brown pelicans.

Some of my personal favorite birds that I saw were black skimmers, American oystercatchers and roseate spoonbills.  There were thousands of ducks, gulls, terns and sandpipers.  It was a far cry from my Christmas Bird count in Granite Basin!

One special highlight was seeing a single aplomado falcon—another extremely rare bird that is making a comeback in Texas.  Thanks to captive breeding programs, both the cranes and the falcons are steadily increasing in numbers.

One of my goals for the new year is to enter all of the bird species I see into my eBird account.  I am frequently asked by customers how many different kinds of birds I have seen.  I honestly don’t know, as my records are incomplete.  I have resolved to work on this.