Return of the quail-Nesting under way 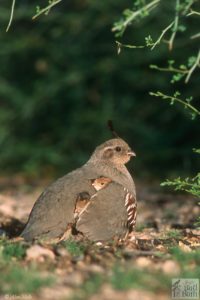 Over the last few weeks, I have noticed the return of Gambel’s quail to my yard. While some folks enjoy having coveys of quail in the yard year-round, it is not uncommon in many residential areas for the quail to “disappear” from September to March.

Unlike many of our summer bird species that migrate in the fall, quail are non-migratory and are here all year. So where do the quail go in winter? My experience is that they move seasonally into adjacent native habitat that is natural and undisturbed.

It has been my observation that quail reappear in residential neighborhoods when it is time to start considering nesting locations. The funny thing about quail is that they seem to prefer nesting in residential areas.

Gambel’s quail are unique in their egg-laying and incubation habits. When the female begins producing eggs (usually one per day) she does not begin the process of incubation until she has finished laying the whole clutch. Depending on the clutch size, this egg-laying process can last two to three weeks. When she has finished laying her eggs, the incubation process begins. This results in all of the eggs hatching within just a few hours of each other even though they were laid potentially weeks apart.

I frequently hear entertaining stories from customers about where they find nests. Sometimes nests are in well-concealed locations and other times they are in real obvious places. A frequent nesting location is in potted plants on decks, patios and porches. Some of the more unusual nest locations I have heard of include under a parked lawnmower, and under an overturned wheelbarrow. Bottom line:

You never know where you will find quail nests.

It is not unusual to receive panicked phone calls at Jay’s Bird Barn during breeding season from concerned homeowners who have accidentally disturbed a nest while pruning low-growing shrubs. It is hard to ‘undo’ what you have done if your pruning activities have exposed a nest. The best thing to do is to try to cover the nest with some branches and stay away.

If you are curious to see what quail eggs look like, get on the Internet and do a Google search, typing in the words “Gambel’s quail eggs.” In just an instant, your computer screen will be filled with a slew of quail egg pictures.

As you might imagine, keeping a nest full of eggs protected and undetected is not an easy task. There are many predators that love eggs, including raccoons, skunks, ravens, scrub-jays, snakes, and, at the lower elevations, Gila monsters. Nest failures occur – that is part of the balance of nature.

We start getting our first reports of baby quail sightings about the second week of May and continue to hear reports of new babies right up into the month of August. It is important to realize that nesting is not a one-time event. April to August is breeding season, which means there is an extended period of time when nest-building and egg-laying can occur, not just a small window of time.

May you be so fortunate to have baby quail in your yard this year!