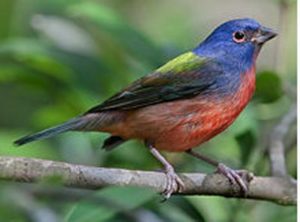 Spring migration has been nothing short of phenomenal this year. The variety and the quantity of migratory birds have truly been amazing over the last few weeks. Unfortunately, most of the migratory birds we have been enjoying so much are moving either further north or up in elevation to their preferred breeding habitat.

Every so often, as birds migrate, they show up outside of their normal range, and are not where they are supposed to be. Perhaps they get blown off course, or maybe they take a left when they should have taken a right. This past week, there were several very unusual bird sightings of really rare birds in the Prescott area – birds that normally would not be found here.

One day last week, a handwritten message was left on my desk stating a customer had called and reported a male painted bunting at her feeder. It seemed everyone was seeing lazuli buntings, but a painted bunting? When I read the note I assumed it was a case of mistaken identity.

I called the customer and it turned out that not only had she correctly identified the bird, she had also managed to get several great photographs of it. There is not another bird species in North America with the striking combination of colors as a painted bunting. It is a bird that would be hard to confuse with anything else with its brilliant red, blue, green and yellow colors.

I have seen a painted bunting only once in my life – in 2008, in the Rio Grande Valley in Texas. This lost bird showed up in the Granite Oaks subdivision out Williamson Valley Road! Unfortunately, by the time I heard about the bird sighting, it had been two days since it had been seen and I didn’t get to see it. However, there was another rare bird to see.

On my day off last week, I got a phone call from a fellow birder who was out in the field at that very moment, and he had just discovered a very rare bird for this area, a prothonotary warbler. This is a species that normally summers in swampy forested habitats. That doesn’t exactly describe the Prescott area!

Not only is this bird very rare for Arizona, (it is normally found east of the Rocky Mountains) this is a species that I had never seen before. This was an opportunity for me to add a new bird to my life list, which doesn’t happen very often.

The first time I went out looking for it, I came up empty-handed, and the following day I did not have a chance to get out. The next day I made another attempt to find the bird, and hoped that it would still be in the area. I was successful in finding it! I got great looks at it and watched it ‘foliage gleaning’ over an extended period of time as it flitted in and out of the sunlight in willow trees. It was very gratifying to add a new species to my life list, let alone to my 2014 state list.

Both the painted bunting and the prothonotary warbler are considered ‘accidental’ species for this area, meaning there have been five or fewer observations of these species in the Prescott area in the last forty years!