Recent birding in the central highlands 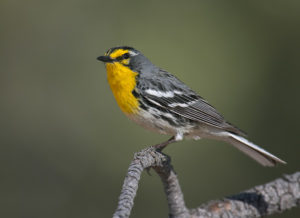 Last Friday I led a bird walk at the Highlands Center for Natural History. It was a windy day and I was concerned the winds would negatively affect our ability to find birds, as they tend to hunker down under these conditions. I was pleased that we saw (or heard) 31 different species, which is pretty good.

During breeding season wild birds actively vocalize to attract a mate, and to both define and defend their territory. This behavior makes it easier to “find” birds that would otherwise be difficult to see.

Probably one of our better finds was a Grace’s warbler that was vocalizing over and over again. Based on its plumage it was a male, and it was obviously staking its claim. This was a new species (a life-bird) for most of the bird walk participants, so I was thrilled that we found it.

At one point, we came across a small, weedy field surrounded by native trees – including Arizona walnut, Fremont cottonwoods, ponderosa pine and juniper. This area was bustling with bird activity, and we spent a considerable amount of time birding in this one spot. Some of the species observed were western bluebirds, western tanager, the red-backed form of the dark-eyed junco (adults feeding juveniles), white-breasted nuthatch, brown-headed cowbird, lesser goldfinch and Bewick’s wren.

The store was closed on Memorial Day, so our family drove out to Chino Valley and headed east on Perkinsville Road, following it all the way to the Verde River. At first the habitat is a broad expanse of grassland, and then it gradually transitions to juniper and pinion pine. The road snakes around the north end of the Wood Chute Mountains and eventually drops right into the Verde Valley. En route, we saw a lot of northern mockingbirds, horned larks, and a single loggerhead shrike.

By the time we arrived at the river it was already getting warm-which probably impacted bird activity-but it was still just a great place to bird watch. I added one new species to my 2012 Centennial Challenge state list, blue grosbeak. There were the typical bird species that you would expect to see in a riparian habitat, such as song sparrow, common yellow throat, yellow-breasted chat, cliff swallows, Abert’s towhee, phainopepla and great blue heron, to name a few.

The highlight for me, however, was seeing a collection of red birds: male northern cardinal, male summer tanager and male vermilion flycatcher-all I can say is wow, what stunning birds! There is something about seeing these brilliant red birds against a backdrop of vibrant green leaves.

After watching the male vermilion flycatcher for a while, we discovered the female as well. At one point, the pair flew right into a tree under which we were standing (seeking some shade). Their behavior tipped me off that perhaps we were near their nest. Sure enough, with a little patience and good observation skills, we discovered the nest in that very tree!

Why does Jay’s Bird Barn support this event? Because we understand the importance of creating an inviting habitat to successfully attract a wide variety of birds to your yard. These six exceptional private gardens will provide ideas for landscaping your yard with birds in mind.