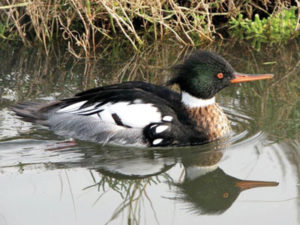 Recent rare bird sightings in the area have motivated me to get out and do more birding! Last week, I received an email from a customer in Sedona with pictures of a dipper in Oak Creek Canyon at Cave Springs Campground. When I finished my shift at our Sedona store on Tuesday, I drove up 89A into the canyon in hopes of finding the dipper.

I arrived at the campground after 3:30 in the afternoon. The towering canyon walls cast shadows over the canyon floor. The lack of sunlight seemed to be affecting bird activity. It was virtually silent in the canyon – other than a few ravens I couldn’t rustle up a single bird.

However, I knew the dipper had been seen at this location just the day before. There was plenty of evidence that a dipper was working the river as there were small deposits of white-wash on rocks that breached the surface of the stream.

After having no success at the low-water crossing, I hiked upstream for a while. When I didn’t locate the dipper, I backtracked to the low-water crossing and hiked downstream for a considerable distance. Finally, after more than an hour of searching, I found a very cooperative dipper! It posed for several minutes, doing its characteristic bobbing behavior – like deep-knee bends – on a rock in the middle of the river.

On my day off last week, I went to Willow Lake in search of red-breasted mergansers. A small flock had been reported several days earlier, and this is a species I had not yet seen this year. Arriving at the lake, I was taken aback by the number of gulls that were floating on the lake. I hiked down to the shoreline and proceeded to glass the surface of the lake with my scope, counting the gulls.

The number of gulls was truly amazing – I came up with 366! That is a lot of gulls this late in the year. I was also surprised to see 24 American avocets, three snow geese, and, yes, I found the red-breasted merganser. Only one, but I only needed to see one to add it to my 2014 state list!

After spending time on the south shore, I drove around to the north shore and from the dock by the boat ramp I observed two common loons. In fact, I could see both of them in my field of view at the exact same time!

The very next day, I received a report that a Pacific loon had been seen at Willow Lake the day before. I headed back out to the lake, as I wanted to add this species to my year list. What a difference a day makes! The day before, I had seen 366 gulls and this day I saw a grand total of seven. I didn’t see any avocets, nor did I see the snow geese. Unfortunately I didn’t find the Pacific loon either, which was disappointing. However, I did see an adult Bald Eagle and a merlin.

If you are looking for a really good place to go birding, consider visiting any of the lakes in the Prescott area – Lynx, Goldwater, Watson and Willow. Take a scope, as the birds are often far from shore and are difficult to identify without the aid of a scope.