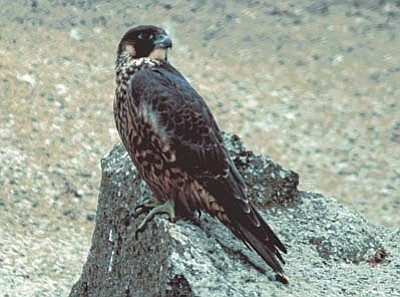 In my column last week, I wrote about an app called iBird PRO. Another electronic program I use is called eBird. This tool is not so much about identification as it is about record keeping and notification. Throughout the world, hundreds of thousands of people have their own personal eBird account.

This online program allows individuals to document their observations—what they saw, and when and where they saw it. If a rare bird sighting is entered into eBird, subscribers in that local area will receive an email notification informing them about that rare bird.

I love this aspect of eBird, as it keeps me informed of what other people are seeing. Every once in a while—when I can squeeze in the time—I try to get out and see what others have reported.

This past week, some of the rare bird sightings included a tundra swan and a snow goose which have been seen at both Watson and Willow Lakes. As their names imply, these are species that normally summer in the Artic and are rare visitors to the Prescott area in winter.

This past Saturday, I went to the Watson Lake overlook off of Highway 89 to look for the swan and goose. A brief scan of the lake turned up neither. However, as I went to leave, I noticed a bird of prey perched on a telephone pole on the opposite side of the highway. I put my spotting scope on it and was thrilled to see a beautiful prairie falcon—an uncommon bird for this area. After a brief look it took off like a bullet, never to be seen again. I then left and headed over to Willow Lake.

From the pullout on Willow Lake Road, I scanned the lake. At any distance, it should be pretty easy to see a swan—this is a huge bird, pure white, so it would really stand out. No luck here either. However, I did see two merlins (a small species of falcon). I also spotted an American Kestrel, another species of falcon, perched on top of a telephone pole along Willow Lake Road.

Wow! Within just a few minutes, I had seen three different types of falcons. Arizona is home to only four varieties, and the fourth, peregrine falcon, is one of the easier falcon species to see in this area.

On the east end of Willow Lake, up in the granite dells, there are some large dead ponderosa pine tree snags. It is a fairly common sight to see a peregrine perched there. I now had a new goal—find a peregrine and complete a full sweep of all falcons found in Arizona.

A quick check of the trees in the dells resulted in no falcons. I decided to check all of the telephone poles along Willow Lake Road between the roundabout on Highway 89 and Willow Creek Road. No peregrine. I then drove through Prescott Lakes, along Smoke Tree Lane, checking the telephone poles there. No Peregrine.

I went back to Watson Lake—this time I found a lone American pelican preening. That was a good find, but still not a swan or a snow goose. I drove back to Willow Lake—nothing. Back to Watson—found the snow goose and seven ring-billed gulls. Back to Willow—still no peregrine, and no swan. Oh well, it was still a great morning! There are literally thousands of water birds at the lakes right now—including ducks, grebes, mergansers, herons, egrets, gulls, pelicans, geese and birds of prey. Let’s get out there and enjoy!

Wishing you a lovely Thanksgiving, and until next week, Happy Birding!