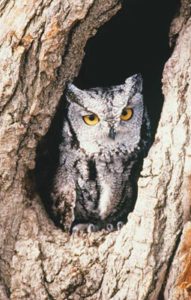 Occasionally, when a customer calls to report an unusual bird sighting in his yard, an invitation is extended to me to come see the rare bird. I received such an invitation this past week when an individual called to report several small owls in her carport. She didn’t know what kind they were, but she thought I might be interested in seeing them.

I am working on a “Big Year” in Arizona, so I was delighted to be invited out to her house. My goal is to see as many bird species as possible in 2014. Owls are one of those species that is hard to find, so I jumped at the chance. Arriving at her home, we peered into her carport. There wasn’t just one or two or three owls – there were four! Better yet, it was a species of owl I hadn’t seen yet this year, so I was able to add western screech owl to my state list.

It appeared this was a family unit – there were two adults and two juveniles. Screech owls are cavity nesters, and the juveniles had recently fledged from their nest – which was either in a tree trunk or in a nesting box. The carport is probably a temporary daytime roosting location for them, as I’m sure there is no room in the inn for four owls! It was interesting to see the adults and juveniles side by side, as there is an interesting difference in plumage. Adult plumage consists of vertical streaking on the breast, whereas juveniles have horizontal barring on the breast.

Two days later, on Saturday, I received a rare bird alert email notification – a black-bellied whistling duck had been seen that morning on the mudflats at Willow Lake. It was exciting to think that I had the opportunity to add another species to my state list. Due to work, I didn’t arrive at Willow Lake until 5 p.m. I was really hoping the bird would still be there.

By sheer coincidence, I ran into a fellow birder at the lake. He had his Swarovski spotting scope with him, which was awesome, as my scope was at home. The whistling duck was still there, and I got great looks at it through the scope. As an added bonus, there was a lone Caspian tern at the lake, as well, so I was able to add yet another bird to my state list!

We saw a good variety of birds at the lake, including peregrine falcon and zone-tailed hawk. I was excited by the success we were having finding birds, so we decided to head over to Watson Lake to look for a long-billed curlew that had been spotted the day before. This would be another new bird for my state list.

From the lookout on Highway 89, we used the scope to scan the mudflats and shoreline, but we never did find the curlew. However, as I was scanning the lake, I saw a black tern probably 400 or 500 yards away, flying over the lake. It was exciting to see two different tern species just minutes apart. My list now stands at 237 species for the year.