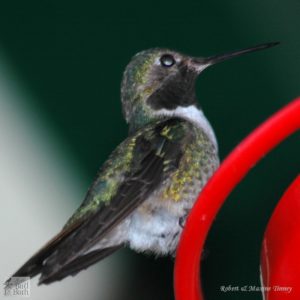 Spring is in the air, and with spring comes a barrage of phone calls. Today’s column will address some commonly asked questions we field here at the bird store.

Question: What is the correct recipe for making hummingbird food?

Answer: The recommendation is to mix four parts water to one part sugar. It is suggested that you bring the mixture to a rolling boil for a minute – make sure the sugar water is cool before refilling your feeder.

Q: When should I hang up my hummingbird feeders?

A: If you haven’t already hung them up, do so today. Just this week I received an email from a customer who is seeing five different hummingbird species at his feeders: Anna’s, black-chinned, rufous, broad-tailed and calliope.

Q: Why do I have a bird flying into and “attacking” my windows? Sometimes the bird just sits on the windowsill and looks into the window – why?

A: Hormone levels are on the rise, and males become particularly territorial during breeding season. When they see their reflection in a window they perceive the image they are seeing to be that of another bird – a rival male – in their territory. Well, that is not acceptable, is it? That intruder must be driven away – even if it takes all day, day after day. This is one of those times when perhaps the expression “bird-brain” is appropriate. Many lovesick males fail to recognize that the rival male they are seeing in the window is simply their own image. I had a cute phone call this week where a concerned customer commented that she thought that the bird was going to wear itself out and die.

Q: How long will this behavior last?

Answer: Sometimes it will last for several weeks. And it is not just the windows on your home that throw these birds a curve ball. Sometimes birds will start attacking their reflection in car side-view mirrors and even windshields. Eventually, the behavior will subside, so enjoy the show – it’s free, courtesy of Mother Nature.

Q: When will we start seeing baby quail?

A: I usually start getting my first reports of baby quail sightings in the second week of May. A female typically lays one egg per day, but she will not start the process of incubating until she has finished laying the whole clutch. Frequent nest sites include potted plants on the patio or deck, so be careful when you are watering, as you just might get the scare of your life when a quail explodes out of a bush in a burst of flight.

Q: How long does it take for the eggs to hatch?

Update: Our nesting box here at the store has an active house finch nest with several babies. I was concerned that perhaps their nest had been detected by the great-tailed grackles that hang around, and that perhaps the grackles had robbed the nest, but fortunately that hasn’t happened. The cliff swallows returned this week here at the shopping center.

Within the week you will begin to see the arrival of many of our summer residents such as black-headed grosbeaks, brown-headed cowbirds, ash-throated flycatchers, western tanagers, Bullock’s orioles and many more. Be on the lookout.