Productive birding along the Verde 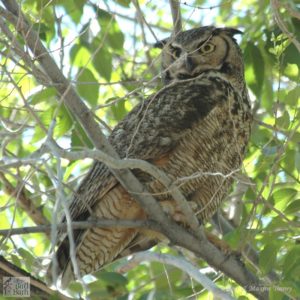 I had such an enjoyable time bird watching this past week at Dead Horse Ranch State Park in Cottonwood, Ariz. While I didn’t even come close to achieving my goal of hitting the 200-species mark for the year, I was able to add several “firsts” to my state list.

Prior to this weekend I had not seen any species of rails, owls, nightjars, tanagers, buntings or grosbeaks this year. All of that changed as I found opportunities to get out and bird before and after the scheduled events at the Verde Valley Birding and Nature Festival.

Adding great horned owl to my state list ended up being easy. There was a pair of owls just a short distance from the vendor tent, perched in some large, old-growth cottonwood trees. They were as active during the day as one would expect them to be at night. They didn’t seem to be bothered at all by all of the comings and goings of both people and vehicles.

Friday was my best birding day. The morning dawned beautiful and clear. I had made the decision to get an early start to my day. I skipped breakfast, and was out in the field before 6 a.m. The birding was super productive. I felt like I was in my element-at the top of my game. I was able to find and see the birds that I was hearing, which isn’t always the case.

For the day, I saw 60 species-which isn’t bad considering I only had time before the vendor tent opened and after it closed. I added several new species to my list including gray flycatcher, lazuli bunting and black-headed grosbeak. It was great to finally see some of the neo-tropical species that had recently arrived.

On Saturday, I chose to visit Tavasci Marsh, which is adjacent to Dead Horse State Park. It has been many years since I had visited this birding hotspot. The walk there and back proved to be fruitful and productive, with many good bird sightings including belted kingfisher, phainopepla, northern mockingbird, song sparrow and marsh wren. At the marsh, I saw a Virginia rail-my first rail sighting of the year-and I also got good looks at a beautiful yellow-breasted chat.

Other new bird sightings this past week included lesser nighthawk, summer tanager and bronzed cowbird. While I always enjoy adding new birds to my state list, I also enjoy seeing bird species that I have already seen. Some of the repeat bird species that I saw include white-faced ibis, merlin, black-hawk, vermilion flycatcher, northern cardinals and green-tailed towhees, all of which were exciting to see.

Closer to home, the active house finch nest just above the sidewalk in front of our store has been a busy scene this past week with four very hungry baby birds. The parents have been busily foraging for food and making trips to the nest to care for their young. By Tuesday, one of the babies had left the nest, and I suppose the other three were out of the nest by Wednesday.

On another note-a quick reminder that this Saturday, May 5, is the native plant sale at the Highlands Center for Natural History located on Walker Road a few miles south of Highway 69. If you have a desire to make your yard enticing and inviting to native bird species, I cannot stress strongly enough how important it is to create a habitat in your yard using native plants.