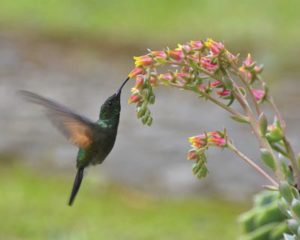 This past Saturday, I led a bird walk around Willow Lake and we saw several Anna’s hummingbirds. Over the past week, I have received reports from customers regarding several sightings of migratory hummingbird species including rufous, broad-tailed and even a Costa’s.

According to Carl Tomoff’s “Birds of Prescott, Arizona” checklist, 11 different hummingbird species have been observed in Prescott at one time or another. Of the 11 species, six varieties occur here on an annual basis, but most folks are lucky to see three or four species in their yard.

The most abundant hummingbird species in our area is the Anna’s. This species actually winters over (in low numbers) in the Prescott area each year. Males have a stunning magenta color on the throat and head. Males are very vocal and spend a good part of their day singing from an open, exposed perch where they can survey and defend their territory.

With our spring-like weather, black-chinned hummingbirds will be arriving any day. This is a slender hummingbird species, about 25 percent smaller than Anna’s hummingbirds in weight, even though there is only about a quarter of an inch difference in length. Males have a black throat with a violet band of color between the throat and belly, which is visible only when the light hits this area just right.

Rufous hummingbirds are considered a transient species – they do not winter or breed here. They pass through quickly in the spring on their way north, and spend an extended period of time here in late summer/early fall as they move south. This species is known for its aggressive temperament. When rufous hummingbirds arrive, they take over hummingbird feeders that were previously being used by resident hummingbird species.

Costa’s hummingbirds are typically found at lower elevations in Arizona, but, occasionally, we get isolated reports of individual Costa’s showing up in the Prescott area. Several years ago, I had one show up in my backyard and it stayed for six days – and then I never saw it again.

Costa’s have a beautiful purple “gorget” – the feathers on the throat that are so distinctive in hummingbirds. The feathers extend beyond the throat to the sides of the neck and are very pronounced when they turn their head from side to side.

Calliope hummingbirds are the smallest hummingbirds in North America, weighing in at just 2.7 grams – which means it would take ten calliope hummingbirds to weigh one ounce! This is another transient species that does not winter or breed here, but passes through in the spring and fall. Their breeding range is high elevation mountains in the Rockies.

On rare occasions, the Prescott area will be frequented by one of the other hummingbird species, which are more commonly found in southeastern Arizona. Some of these species are: broad-billed hummingbird, blue-throated hummingbird and the magnificent hummingbird. Arizona is truly the hummingbird capital of the United States.

If you want to attract hummingbirds to your yard, it is as easy as hanging out a nectar feeder with sugar water. The correct ratio is four parts water to one part sugar and it is recommended that you boil the solution and let it cool before filling your hummingbird feeder.