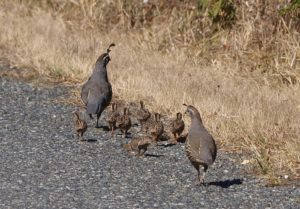 I finally saw my first baby quail of the summer this past Wednesday!  I can’t believe it has taken me so long to see baby quail this year.  It was a small family.  I saw only one adult, and four babies, who were already ‘teenager’ sized.

Last week I used an expression in my column that describes bird behavior after breeding season winds down – post-breeding dispersal.  Today’s column will delve into this topic more deeply.

In spring, as migratory birds pass through the Prescott area on their way north, they are not very habitat specific as they forage for food.  Bird species normally found at higher elevations during breeding season – such as western tanagers – can be seen here in town as they stop over briefly and refuel.

However, once a bird species has reached its destination where it will stay and breed, it gravitates to a specific, preferred habitat – the habitat where it will spend the breeding season.

During the process of attracting a mate, courtship, nest building, incubating, and rearing young, adults stay in an area close to their nest.  This area is referred to as their territory.  Adult males and females don’t stray very far from their nest site while the nest is active.  They diligently defend their territory—from other birds of the same species, or from potential predators that might try and steal either their eggs or young.

After the baby birds from the last brood (or clutch) have successfully fledged and are no longer dependent upon their parents for feeding and training, it is not uncommon for the parents and the juveniles to disperse.  They are no longer tied down to the nest site.  The adults job of rearing their young is finished.  They don’t need to defend their territory anymore.

It is during this time that we start to witness the phenomenon of post-breeding dispersal.  Species that we were seeing in the spring, such as Bullocks orioles, tanagers and grosbeaks, all of a sudden start showing up again in our yards and at our feeders.  We may have seen these species in our yard back in May, but we haven’t seen them since then.  All of a sudden, they are back, before heading south for the winter.

This post-breeding behavior gives us a second chance to enjoy the variety of beautiful birds that summer in the Central Highlands area of Arizona, even if it is only for a few more weeks.

Many of our summer birds are in the Central Highlands for only a few months.  Once they have finished rearing their fledglings, there isn’t a whole lot for them to do here other than to eat!  And that is just what they do.  With migration looming in the near distant future, both adults and juveniles get down to business when it comes to eating.  And they eat a lot!

As breeding activity starts to wind down in August and September, you will notice that many species will come back to your feeders.  This is because they switch from their summer diet of insects, to a diet of seeds in the fall and winter months.  Watch for adult birds accompanying their fledglings at the feeders in your yard as they teach them where to find food.