Participation in birding festival results in many bird sightings 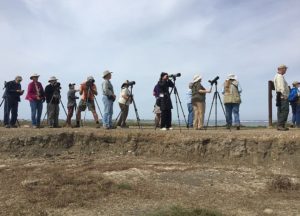 Two weeks ago, for the first time in my life, I attended a birding festival as a participant. I have attended festivals for years as a business owner—selling optics in the vendor tent—which prevented me from participating in the guided bird walks.

I recently attended the San Diego Bird Festival and went on three different trips—the San Diego 100, Birding the Border, and a pelagic field trip. Each outing had a specific purpose with certain targeted bird species.

The goal of the San Diego 100 trip was to see at least 100 different bird species during our day-long outing. To accomplish this, we visited a variety of habitats, including city and county parks, a National Wildlife Refuge, estuaries, rivers, the rocky coast and sandy beaches. We had a very fruitful day, racking up about 140 species for the day!

I bet you will never guess what I did when we returned to Mission Bay after 11 hours of birdwatching. Well, I’ll tell you! I went birding on my own until there was no more daylight. I added three more species to my day list—Townsend’s warbler, belted kingfisher and black skimmer.

The next day I did a pelagic trip. The word pelagic is Greek in origin and means “open sea”. About 60 participants and six guides boarded a boat and headed out to find “pelagic” birds—birds that spend most of their life on the ocean. This was my first official pelagic trip, and overall, it

was a really good experience.

Some of the birds we saw included pomarine jaeger, brown booby, Scripp’s murrelet, Cassin’s auklet, common murre, surf scoter, northern fulmar, and black-vented and Manx’s shearwater. We also saw a fair number of whales and dolphins, and we even saw a giant sun fish.

My last trip, Birding the Border, was spent in the Tijuana River Valley. At times, we were just a few hundred yards from the Mexican Border. Target birds for the day were southern California specialty birds such as California thrasher, California towhee, California gnatcatcher, wrentit, Nuttall’s woodpecker and Ridgeway’s rail, and we found all of them. We had some surprises too—such as a red-breasted nuthatch about 10 feet above sea level. This is a bird I normally associate with being in a forested habitat in a mountainous environment.

I saw over 160 different species during the festival, which is a pretty impressive number of birds in such a short period of time. However, I missed seeing one of my target birds—mountain quail. On my drive over, I met up with a friend who lives in San Diego, and we went to a place called Kitchen Creek, in the Cleveland National Forest, to look for this elusive species. We hiked on the Pacific Crest Trail and really worked hard (unsuccessfully) to find the quail. I am inclined to believe this is a mythical bird created by someone’s wild imagination (even

though it IS in the Sibley Guide).

In the near future, there are several upcoming birding festivals. To mention a few, there is the Verde Valley festival at Dead Horse Ranch State Park in Cottonwood in April, the Mesa Verde Ute Mountain birding festival in Cortez, Colorado in May, the hummingbird festival in Sedona in July and the Southwest Wings festival in Sierra Vista in August. If you want to see a lot of birds, I encourage you to participate in one of these upcoming festivals. If you need more information on any of them, stop by the Bird Barn and we will be happy to help you.