Owling in the Huachucas 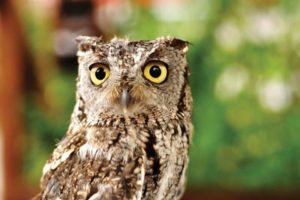 Last Wednesday, my wife and I drove down to Sierra Vista to be binocular vendors for the Southwest Wings Birding and Nature Festival. The festival sponsored several owling field trips each evening, but, to my disappointment, they were already filled.

Thursday morning I went birding on my own in Miller Canyon in the Huachuca Mountains. There is a guest ranch at the end of the road that is famous for the quantity and variety of hummingbird species it attracts. In a span of about 30 minutes, I saw eight species: magnificent, blue-throated, broad-billed, broad-tailed, violet-crowned, rufous, Anna’s and black-chinned – lots of black-chinned!

One of the male black-chinned hummingbirds that I saw had a problem with its beak – the tip was bent downward, almost at a 90-degree angle, as if it had run into a hard object, such as a window. In spite of the funny-looking beak, it seemed to be getting along just fine as it came frequently to drink at the nectar feeders. I also saw a female black-chinned where the upper bill was slightly longer than the lower bill, which is not normally the case.

One of the advantages of using good-quality optics – I was using Swarovski’s – is the ability to focus on objects that are really close. A lot of binoculars don’t have the close focus capability, making it impossible to see such fine details so closely.

Thursday evening we went up Ramsey Canyon in the Huachuca Mountains looking specifically for western screech owl, whiskered screech owl and elf owl. The leader of the group was a very good birder, but unfortunately the birds weren’t too cooperative. In spite of our best efforts we saw only one owl – a western screech owl. We got really good looks at it, which was very rewarding.

For me, however, the highlight of our owling adventure was the opportunity to use a pair of night-vision goggles for the very first time. One of the leaders brought two pair and an infrared light. It was an amazing experience to use night-vision goggles in conjunction with the infrared light. Even though it was pitch dark outside, I could see clearly with the use of the goggles.

I was hoping to see a whiskered screech owl, as this would have been a new bird for my life list. As we didn’t have a lot of success finding owls Thursday night, we all decided to go out again Friday night.

This time we drove up Miller Canyon. We stopped the car occasionally and got out and hiked a short distance before the leader began calling for owls. We listened intently for long periods of time to see if we could get any kind of response, but, unfortunately, no owls responded, so we struck out again!

In spite of not having a lot of success finding owls, my two nights of owling were very enjoyable. I love being with fellow birders, and I love being in nature. I guess I’ll just have to make another trip down to southeastern Arizona and try to find the whiskered screech owl!